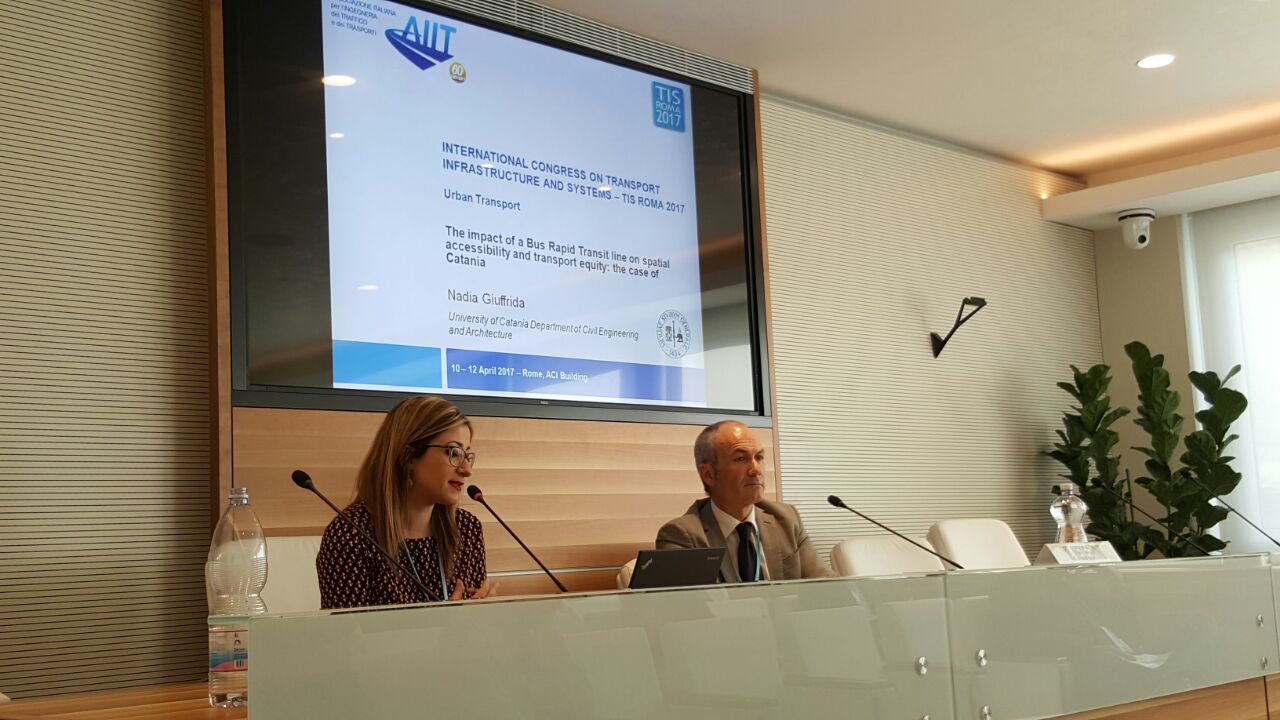 The problems of public transport systems were discussed during the session n. 13 of the Congress. During this session, chaired by Marco Medeghini, experiences of public transportation systems from various cities were presented (of particular interest, the experiences of Catania and Turin). The future of tramways was focused during an interesting speech by Giovanni Mantovani,  current President of the AIIT Association.

Matteo Ignaccolo, Giuseppe Inturri, Nadia Giuffrida, Michela Le Pira and Vincenza Torrisi – Structuring transport decision-making problems through stakeholder engagement: the case of Catania metro accessibility  / This work presents a procedure for the structuring of a problem hierarchy by involving key stakeholders, representing a first step towards a participatory decision-making process. The case study regards Catania metro accessibility and the building of a new metro station (named Milo) that will be opened next year..The decision should be based on different criteria, including non-monetary ones, and it should be able both to solve the mobility needs of the district and to improve the quality of life of the whole city.From the results of the interviews submitted to the key stakeholders, a first hierarchy of the problem has been built, to be used for analysis via appropriate multicriteria decision-making methods.

Francesco Deflorio, Hernan Dario Gonzalez Zapata and Marco Diana – Public Transport resilience during emergency: a simulated case in Torino / Nowadays detailed Public Transport (PT) data are available thanks to open standards such as the General Transit Feed Specification (GTFS), introduced to enable information services usually provided via web. In this study this dataset was used, for accessibility analysis, based on some indicators to measure how the zones of a city are well connected, in terms of capacity, number of transit options and their efficiency. The study focuses mainly on the assessment of the consequences of transport resources disruption, considering a large flooding event as risk scenario, which could generate also the closure of bridges and then limit the PT coverage. The presented case study was Torino (Italy).

Renzo Emili – Tram and Light Rail Transit in modern urban mobility systems / The consequence of the exponential growth of individual transport by car this phenomenon was a gradual urban transformations of the cities .These transformations are mainly due to the migration of inhabitants from the city centre to the suburbs. Several issues arise from what said above: desertification and environmental decay of the city center, exasperated car commuting, social decay of the suburbs in absence of a valid public transport linkage. To sort out these issues is mandatory to rethink mobility systems traditionally based on highways and subway lines, much expensive in terms of Life Cycle Cost compared to cheaper and innovative Light Rail systems. The paper focuses on some innovative Light Rail systems already implemented in significant cities, such as: Strasbourg (Euro Tram), Dallas (Light Rail Transit), Karlsruhe (Tram-Train network).

Maria Vittoria Corazza, Umberto Guida, Antonio Musso and Michele Tozzi – Shaping the future of buses in Europe: outcomes and directions from the EBSF and EBSF_2 projects / EBSF – European Bus System of the Future (2008 – 2013) and its follow-up EBSF_2 (2015 – 2018) are two research projects funded by the European Commission and led by UITP with the aim of developing a new generation of buses across Europe. Within EBSF the accomplished goals were to increase the bus attractiveness by testing innovative vehicles  integrated in the European urban scenarios . Coherently with that, EBSF_2 is committed to raise the image of the bus through solutions for more and more increased efficiency of the system, mainly in terms of energy consumption and operational costs. More comfortable and accessible bus layouts, advanced maintenance tools and processes, energy management, IT standard equipment and services and ecodriving are key working areas in both projects.

Nadia Giuffrida, Giuseppe Inturri, Salvatore Caprì, Sebastiano Spica and Matteo Ignaccolo – The impact of a bus rapid transit line on spatial accessibility and transport equity: the case of Catania / The purpose of this paper is to verify if a transit network based on few BRT lines with high level of service and ridership can provide an equitable access to all residents and to a large number of destinations, compared with traditional network bus systems with low level of service but high spatial coverage. To this aim a relative accessibility measure between private transport and public transport (by car) was used, properly weighted by data on population, in order to obtain a simple indicator of spatial accessibility to opportunities. A high spatial resolution approach is used to capture the importance of different stop density for walking access impedance, through a GIS transport modeling software. The methodology is tested for the case study of Catania (Italy), by modelling the impact of three Bus Rapid Transit (BRT) lines on urban accessibility, considering different scenarios of the transport network.

Marcello Corsi – LRT urban tracks. The case of Luas Cross City design and construction in Dublin / Luas Cross City (LCC) is Dublin new 5.9km light rail extension, being built as part of the overall development, since 2004, of a new, modern and efficient LRT network for the Irish Capital. One of the major challenges for what is essentially a city central, on street LRT, has been the design and construction of the track system, and the re-configuration of the whole urban landscape and roads around the new Luas. Embedded track design had several main objectives to fulfil, including an easy and quick installation, standardisation of construction, a design life of 60 years for the track structure and 30 years for the rails, easy and cost effective maintenance, low Life Cycle Cost and perfect durability under tram and road vehicle traffic. The Contractor, in conjunction and collaboration with TII experts, developed an innovative track design. The track construction methodology was be presented with a view to demonstrate the suitability for confined spaces, speed of construction and achievement of the required durability.

Maria Vittoria Corazza, Marianne Karlsson and Antonio Musso – More accessible bus stops: results from the 3ibs research project / Within 3iBS specific emphasis is placed on the design of bus stops as crucial elements to improve the quality and accessibility of bus services. The rehabilitation of bus stops serves as a case to stress the need to have univocal directions to design inclusive bus facilities as part of a general process which makes accessibility one of the key features of this new generation of bus systems. General 3iBS guidelines and specific recommendations for implementation of innovations in this field were so provided.

Giovanni Mantovani – Which role for tramways in the next years / In the first decades of last century, tramways were the main means of local public transport. Reasons of decline and revival are outlined. Then various innovative characteristics of the modern tramways are examined, in order to highlight the offered advantages. However, pros and cons must be considered, to understand when the construction of new lines or systems is useful and sustainable. Thus, it is attempted to define the field of advisable use of tramway (rather than buses, BRT, metro), in terms of transport demand and other factors. The need to support tramway plans with a proper general policy for mobility was reminded and some advice was given to develop good new systems.