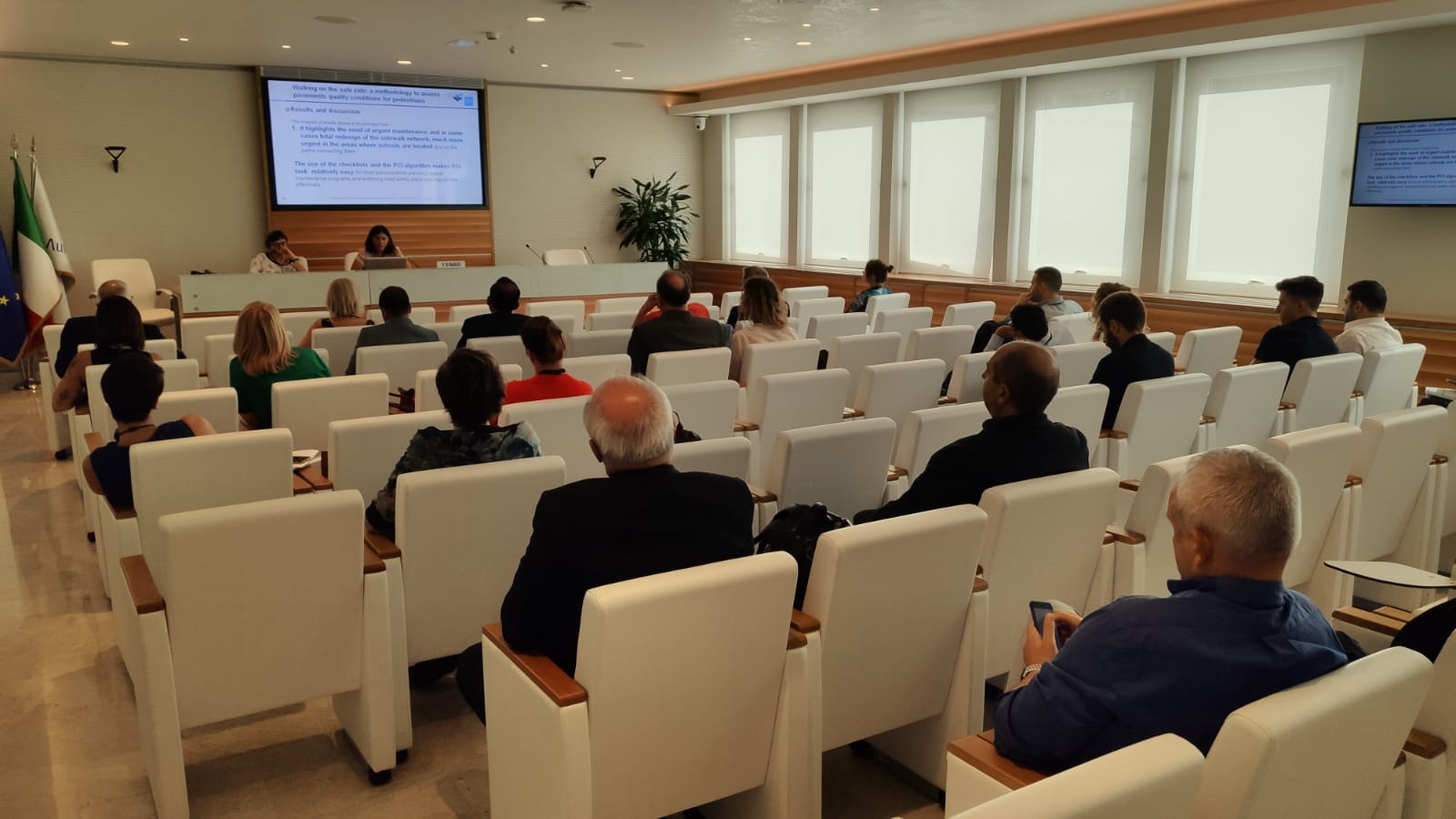 Sandro Colagrande, Danilo Ranalli and Marco Tallini – GPR investigation on damaged road pavements built in cut and fill sections / We present the GPR results dealing with flexible road pavements located on cut and fill sections. The aim is to evaluate the road damage (particularly the ramified cracks) taking into consideration also the cut and fill sections height and the traffic load. GPR evaluation was carried out on 14 sites selected in the secondary non-urban road network of L’Aquila, a medium-size urban area of Central Italy. Stress induced by traffic load generally affects a road section thickness of about 1.5 m. A monostatic 1600 MHz GPR antenna was used because its quite high-resolution when inspecting road damage. GPR acquisition was carried out in damaged and adjoining undamaged road sites, to compare GPR data of the two areas. GPR data analysis was based on the sweep-rectified power approach to evaluate the radar signal attenuation curve vs. depth, which permitted to single out different road types of damage and to discuss the factors which caused them. In conclusion, the results of a GPR survey conducted on degraded road pavements built on cut and fill sections and characterised by low traffic road is presented. The evaluation on the attenuation curves of the radar signal detected on two road pavement, performed by sweep rectified power method, allowed us to determine the attenuation constant of the damage. Through the comparaison of the attenuation of this constant, detected on two adjacent longitudinal sections belonging respectively to a damaged portion and an undamaged stretch, made it possible to trace the causes of the degradation of the analysed pavements. Finally, the results showed high repeatability to demonstrate that the methodology can be trusted to evaluate deteriorated road pavements characterised by cut and fill sections.

Paola Di Mascio, Daniela D’Alessandro, Laura Moretti and Maria Vittoria Corazza – Walking on the safe side: a methodology to assess pavements quality conditions for pedestrians / Pedestrians walk where they feel comfortable, and if they do not, they detour towards more comfortable and safer routes. Irregularity of maintenance operations to restore evenness conditions after damages from shocks, weather phenomena or due to the installation of equipment (posts, fences, urban furniture, etc., which limit the availability of walkable surface), substandard execution of the pavements are all factors contributing to the pavement unsuitability, thus to poor comfort and safety levels for pedestrians. All of the above can be solved by appropriate maintenance management programs and the choice of the adequate type as well as the timeliness of maintenance works can optimize the quality of maintenance interventions. The paper deals with a methodology specifically developed to highlight priorities in this type of maintenance programs for pavements, and derived from the most-known Road Management System. The methodology includes, on the one hand, survey, classification and analysis of sidewalk distresses, adapting an index already standardized by ASTM for Roads and Airports: the PCI – Pavement Condition Index, here specifically reformulated to detect the different types of distresses typically surveyed on sidewalks. On the other hand, a complementing walkability analysis assesses pavements quality according to the pedestrians’ perception, and contributes to highlight the distresses severity and consequently how to prioritise maintenance interventions. A case study in a residential district in Rome, where the lack of regular maintenance results into a network of unsafe sidewalks, was also developed. Starting from some preliminary outcomes observed in a nearby test field, usual detours were surveyed, related to the levels of distresses and linked to the pedestrians’ assessment of comfort and safety. The goal of the research is to validate the methodology with consolidated results and eventually to provide advanced knowledge for further applications. Research was to assess toward a performance-driven approach for assessing walkability in field of usage, appearance and safety particularly in home-to-school paths. Piazza Mincio and Piazza Caprera were the objects of this study. The percent of deteriorated sidewalk is between 30 and 50% pushing the students to involve carriageways. Also there is a very urgent need of maintenance of the side-walk. A safety Potential Indicator is also necessary in this kind of zone in order to adapted the infrastructures, the signalisations and the maintenance.

Pawan Deep, Mathias B. Andersen, Nick Thom, Alessandro Marradi, Davide Lo Presti and Martyn Stonecliffe Jones – Evaluation of Load transfer in rigid pavements by Rolling wheel deflectometer and Falling weight deflectometer / Rigid pavements have widespread use, e.g, in motorways and airports, due to their excellent properties such as high bearing capacity and long lifetime. However, when rigid pavements fail it is often due to bad load transfer efficiency (LTE) at its joints. Traditional methods of measuring LTE can be time consuming. Here, we have studied how it can be possible to measure LTE using a moving load with the aim of achieving higher productivity. An experiment simulating Rolling Weight Deflectometer (RWD) measurements on a joint was carried out to gain understanding and confidence that can guide the analysis of real RWD data.  Continuous data from measurements across a joint allows for determination of not only the LTE but also additional parameters characterizing the pavement and the joint. A semi-analytical model was implemented for simulating the pavement response next to a joint and used for interpretation and verification of the experimental data. The results show promise for the use of moving loads for rapid evaluation of joints.The study provides insights into a continuous structural assessment to jointed rigid pavements using lasers and a moving wheel laid to evaluated laid transfert. A fast 3D semi-analytical model has been developed to predict the response across a joint on both the loaded and unloaded slabs. Then, the results from the experiments compared to the modelling encourages to go ahead with the back-calculation. The back calculation could lead to a more detailed assessment of slabs and the condition of their joints. Finally, further work will involve measurement technology is promising and should be studied further.

Celso Luiz Dos Santos Romeiro Júnior, Lélio Antônio Teixeira Brito, Lucas Fraporti Heller, Gabriel Grassioli Schreinert, Washington Peres Núñez, Jorge Augusto Pereira Ceratti and Cecilia Merighi – Impact on pavement deterioration due to overload vehicle regulation in Brazil / The investments required to maintain a good pavement condition during its life-cycle are directly connected to the fleet weigh spectrum. Recently, Brazilian authorities have agreed on increasing the trucks overload tolerance – from a 7.5% maximum overweight per axle to 10%, despite maintaining the gross vehicle weight (GVW) to a maximum of 5%; this allowed heavier vehicles on the country highways and increased the road owner cost to maintain functional parameters within expected limits. To evaluate the impact of the registered overload on pavement deterioration and, specifically, due to the new overload regulation, an assessment on the pavement’s life cycle alteration was carried out using the data traffic load obtained during the year of 2017 in a truck weighting station located on the BR-116 – a Brazilian federal highway between the cities of São Paulo and Rio de Janeiro. The HDM-4 model has been applied in order to obtain the pavement deterioration and to conduct an economic evaluation in a 30-year life-cycle cost analysis considering four scenarios: (i) no overload tolerance; (ii) ancient overload regulation– 7,5% tolerance applied on the axle-load weight limits; (iii) new overload regulation – 10% tolerance applied on the axle-load weight limits; (iv) actual axle-loads obtained – including overloaded vehicles. The maintenance activities considered in the study were obtained on the Brazilian Department of Transport Infrastructure catalog. The results demonstrated that the new regulation does not have major impact in the agency costs primarily because of the non-variation of the GVW tolerance. However, the scenario with the actual axle-loads resulted in a considerable impact in the LCCA in terms of Net Present Value (NPV), what reinforces the need of a better inspection of vehicle loads in order to preserve the pavement investments. In fact, it was concluded that the investments required to maintain pavement conditions during it’s life-cycle are directly connected to the fleet weight spectrum. The case analysed was a weigh station with load enforcement, and, even so, for a 30 year period it was obtained a 5.73% difference the NPV between the different overload considerations considering that the pavement must perform the level of serviceability imposed by some Brazilian Agencies. The study also showed that the level of the serviceability to be maintained has an important role on the results. Finally, it’s expected that, in an analogous analysis is performed with data from a scenario where there is no load enforcement, a larger difference between the life cycle costs would be obtained.

Laura Moretti, Paola Di Mascio, Giuseppe Loprencipe and Pablo Zoccali – Theoretical analysis of stone pavers in pedestrian areas / This paper compared two approaches used to analyse a modular pedestrian pavement made of hexagonal basalt pavers. In presence of occasional heavy traffic roads, the pavement should be verified using methods currently used for road pavements. Different loading conditions were examined varying the geometry of the blocks, and the magnitude of the vertical load. In all cases, the results obtained from the analytical theory of Westergaard were higher than those obtained from a finite element model (FEM). Therefore, a parametric study was performed in order to use the analytical method as an alternative to the costly FEM approach. The results of comparison gave a correction factor, valid for hexagonal pavers: it permits to analytically estimate with good approximation the stresses induced by heavy loads applied to natural stone blocks. The study note that the presence of occasional heavy and commercial vehicles should be considered as part of design of the stone pavements in pedestrian areas to prevent their permuted failure. Several configuration of loads and geometry of pavements have been considered to compare the maximum tensile stress by the load calculated according to two approaches : an analytical Westergaard’s theory and a finite element analysis with software Abaqus. The results show that the analytical method overestimated the mechanical response of the examine block pavement and a correction factor equal to 0.67 is needed to reduce the maximum tensile stress provided by Westergaard’s theory to obtain results coherent to those provided by FEM analysis. This is an interesting result since the analytical theory provides an inexpensive procedure for the analysis of block pavements. Finally, parametric analyses like that presented could be conducted for other paver geometries, until a list of correction factors useful to follow the Westergaard’s approach rather than developing costly FEMs.