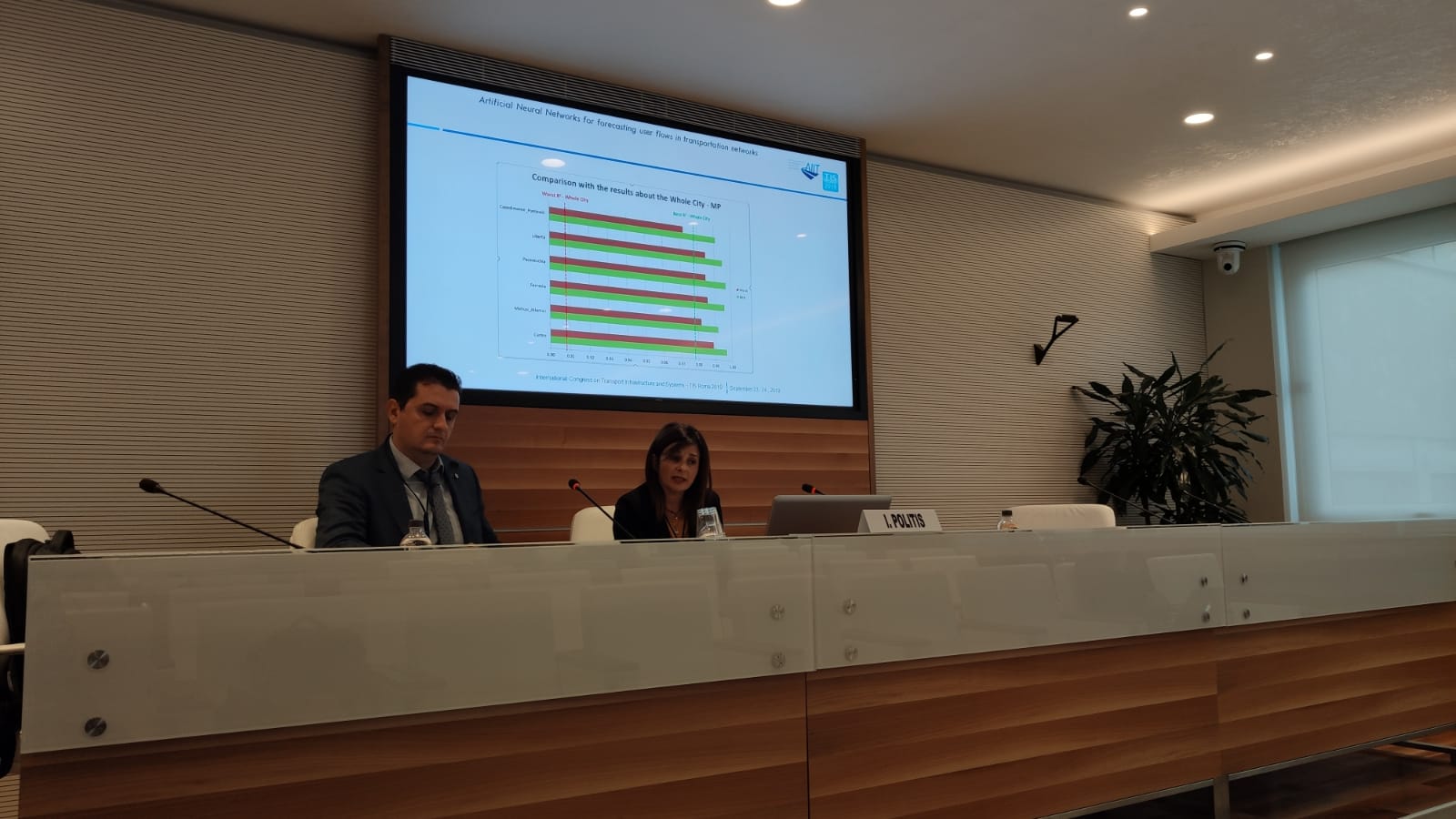 Anton Sysoev, Pavel Saraev, Alexander Galkin and Semen Blyumin – Mathematical Remodeling Concept in Simulation of Complicated Variable Structure Transportation Systems / Mathematical remodeling is aimed at transforming mathematical or simulation models of one or different classes (or subsystems which form a studied system) into a model of one predefined unified class. Depending on the goals and specific applications, different interpretations of remodeling are possible. Theoretical model constructed based on its physical meaning, can be quite complicated and is not suitable for further analysis. In this case, an array of input and output training data (which could not be obtained in real conditions) can be generated using the software implementation of the model. Using these obtained values and according to remodeling concept it is necessary to determine a new model of a given structure with the required accuracy, which can approximate the original model in the best way. The paper presents examples of applying mathematical remodeling concept to constructing a dynamic system with a variable structure. Such systems are used to simulate an inertial torque transformer, which is a part of a stepless car transmission. The accuracy of the obtained model is estimated. Another example of this approach is the method of estimating freeway section capacity. Feedforward neural networks are used as remodeling classes in both cases. To conclude, the reported case study summarises Matematical Remodeling Concept ideas and gives examples of applying them to elements of Intelligent Transportation Systems. The study of technical devices used in vehicles using their mathematical models is an effective tool to improve their functioning quality. Finally, in the sense of digitalisation it makes possible to built mechanisms taking into account predicated freeway capacity rates for the rational usage of cars technical elements to optimise using existing transportation corridors.

Danae – Zoe Mitkas and Ioannis Politis – Evaluation of Alternative Ramp Metering Scenarios on freeway on-ramp with the use of microscopic simulation software Vissim / The main goals of this paper include the investigation and evaluation of alternative ramp metering scenarios on a freeway on-ramp and the development of a “smart” signal controller, with the use of PTV Vissim microsimulation software. A specific area was selected for the implementation of this study. More precisely, interchange K8 on the Ring road of Thessaloniki was chosen, in which, measurements of traffic volume were taken using a drone to record the traffic. Using the Vissim platform, a software model was created and evaluated to determine its accuracy compared to the existing situation. Different scenarios were developed, and the function of the interchange was observed. In the first set of scenarios, the traffic volume was increased by certain percentage and the results were collected and examined. Next, two new scenarios with the use of ramp metering were developed and a traffic signal was placed on the on-ramp. In the first of these two scenarios, a traffic signal light with a fixed-time traffic program was placed, whereas in the second one, a vehicle-actuated signal light was created, with the use of the VisVAP add-on. A flow chart was generated and used to program the signal light, so that each time high traffic volume was detected by the detectors that were placed in the expressway, the red light was activated. After all the scenarios were created and examined, certain KPI’s were collected and used for the overall evaluation. The results from the use of the ramp meter, either the fixed-time or the vehicle-actuated, showed that a ramp meter can be very useful in the improvement of the traffic conditions and may have a positive environmental impact cause allows a better traffic congestion. This papers shows that the ICT technologies can help improve the traffic conditions and engineers have powerful tools to simulate and evaluate interventions. These evaluation of applications should be done in an integrated manner because combination of well-applicable schemes like ramp-metering can indeed improve the quality of life in urban areas.

Mariano Gallo and Giuseppina De Luca – The use of Artificial Neural Networks for extending road traffic monitoring data spatially: an application to the neighbourhoods of Benevento / In this paper, the use of Artificial Neural Networks (ANNs) for extending road traffic monitoring data spatially is studied. The problem consists of estimating the traffic flows on some links of an urban road network knowing the corresponding data on some other links of the network (monitored links). In a previous paper, the authors studied this problem referring to a whole city obtaining promising results. Starting from these results, in this paper we test if to limit the number of monitored links and non-monitored links to a neighbourhood of a city improves or not the results. These results are useful in large cities where some parts of the network are not at all influenced by other parts and each neighbourhood can be studied independently from the others. In order to obtain these results, we have partitioned the network of Benevento in six traffic zone and trained six different ANNs with simulated data. Preliminary results show that for some neighbourhoods to limit the analysis area improves the results with respect to consider the whole network, while in other cases the results are worse. In the final paper, other tests will be performed and described so to identify the best trade-off between the area dimension and goodness of the results. As a conclusion, a spatial extension of road traffic flow data is an interesting method for saving investment costs in ITSs. With this method it is possible to reduce the number of « real » detectors, adding some « virtual » sensor which data are esteemed. Finally This approach requires a method for forecasting traffic flows on unmonitored links starting from the data available at monitored links. Future research will be addressed to test the method training ANNs with real data instead of simulation.

Gaetano Fusco, Chiara Colombaroni and Natalia Isaenko – A Simulation-Optimization Method for Signal Synchronization with Bus Priority and Driver Speed Advisory to Connected Vehicles / The paper introduces a model-based optimization procedure for the design of a control system with signal synchronization, real-time bus priority and green light speed advisory to car drivers. The traffic model simulates car traffic as platoons and bus movements individually. An optimization routine simulates the effect of different bus priority rules, which can be actuated online through bus identification devices and applies a metaheuristic algorithm to optimize signal settings. The macroscopic model and the design method have been applied and also tested in microsimulation in via Prenestina in Rome with a tram line on a reserved lane. Results obtained show that offline signal optimization and online signal priority can significantly reduce both travel times of bus riders and delays for total traffic. Similarly, speed advisory to drivers, if considered in signal optimization, can improve not only drivers’ delays but even transit passengers’ delays because it allows a more efficient use of the road. This paper concluded that optimisation with respect to all users reduces each single component of the total delay and reduces total delay by 44%. Optimisation with GLOSA (green light optimal speed advisory) reduced delays on the main artery not only for advised car drivers, who are served by advisory, but even for tram users, although delays at cross streets increase slightly. In a not negotiable fraction of cars is connected, the length of the queue at signals can be estimated and the corresponding green extension can be accurately computed.

Anton Sysoev, Creation of Intelligent Transportation and Logistics System and Selection of Its Optimal Parameters – The authors have carried out the SWOT-analysis of how the module of a regional intelligent transportation and logistics system (RITLS) is created and developed on three directions: they analyzed the  current condition of the RITLS in Russia, they analyzed how the creation and development of the RILTS influences  all target groups of service users; and how the influence of creation and development of the RILTS influences the development of the region and national economy as a whole.The paper presents the results of the conducted SWOT-analysis. To define optimal system operation parameters the authors offer their wording and numerical solution how to calculate the global minimum of the time needed to cover the whole section of the road route in view of delays on entry ramps.The optimal parameters of the transportation system they found were applied to calculate the time, needed to cover the sections of the way on road route and to evaluate transport delays arising before the car enters the entry ramp section.