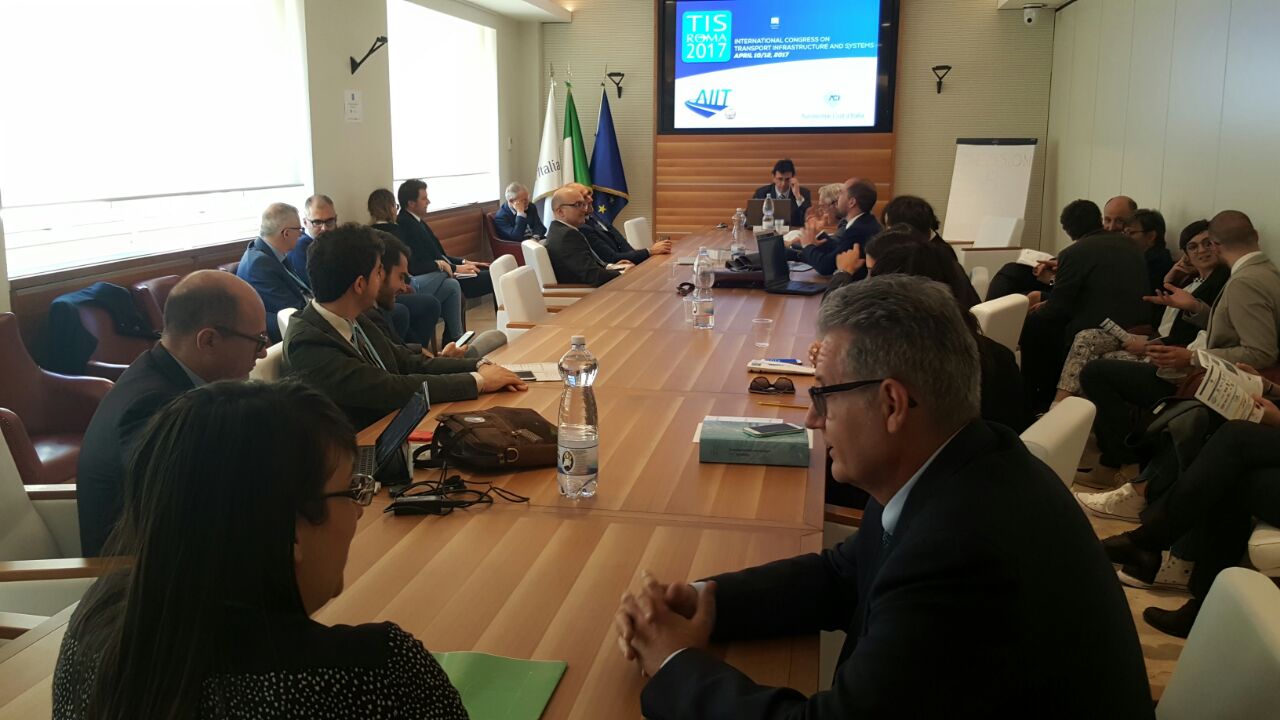 The issue of modern technologies applied to pavement construction was addressed during this session, chaired by professor Marco Pasetto. The effects of the use of polymeric materials, as well as the effects of the addition of minerals, were discussed, presenting the most recent results of scientific laboratories of various Universities

Salah Zoorob, Cesare Sangiorgi and Shahin Eskandarsefat – A Review of Sulfur Extended Asphalt Modifiers – Feasibility and Limitations / Sulfur Extended Asphalt Modifier (SEAM) is currently being marketed as an additive for hot asphalt mix-tures. Typically 40% by mass of the binder phase in the asphalt mix can be replaced by SEAM using con-ventional mix design and production techniques. During the production stages of SEAM asphalt mixes in conventional hot mix plants, the sulfur component will exist in the liquid phase, which requires careful thermal management to control gaseous emissions. The work presented a general review of exposure limits for sulfur dioxide and hydrogen sulfide emissions and their short and long term health effects on healthy and asthmatic individuals.

Rami M. Alfaqawi, Gordon D. Airey and James Grenfell – Effects of Different Fillers on Bitumen Mastics Chemistry and Rheology / The study attempted to provide an improved understanding of the factors affect the laboratory aging process of binders. and investigate the effect of different fillers including hydrated lime on the ageing of asphalt mastic mechanisms. Different aging methods to simulate the short and long term aging of binders and mastics were used in this study, the changes due to the aging are measured by different aging indices. Also, the chemical changes of the binders were investigated by the means of Fourier transform infrared spectroscopy (FTIR).  The results indicated that the fillers can significantly affect the rate of oxidative aging, and this depends mainly on the filler type and concentration. Also the effectiveness of filler on reducing the aging rate depends on the bitumen source. The results also showed that hydrated lime is active filler that reduces the oxidative aging hardening rate more than limestone and granite fillers do and this also correlated with the chemical changes measured by FTIR by the means of the rate of change of carbonyl and sulfoxide oxidative products.

Mauro Ranieri, Clara Celauro and Loretta Venturini – Performance improvements of asphalt mixtures by dry addition of polymeric additives / The authors showed the results of an experimental study concerning the development and optimization of asphalt mixtures for binder and base courses, improved with specifically engineered additives. The focus was on the mechanical improvements the mixtures as achievable via the dry modification with the SuperPlast additive developed by Iterchimica, in order to make use of aggregate and bitumen of average quality, as locally available, in order to save better quality not-renewable resources. In particular, the modified mixtures prove to have better performance in terms of both permanent deformation resistance and stiffness modulus. Moreover, the presence of SuperPlast allows the optimization of the mixtures at lower binder contents, thus proving the economic feasibility of this modification, when considering the ad-vantage of consuming mixtures components of average quality for production of highly performing mixtures.

Marco Pasetto and Nicola Baldo – Dissipated Energy Approach for the Fatigue Evaluation of RAP Asphalt Mixtures / The results of a laboratory investigation on the fatigue resistance of Base Courses Asphalt (BCA) mixes, for road pavements, were discussed. The experimental analysis was performed on bituminous mixtures with Reclaimed Asphalt Pavement (RAP), up to 40% by weight of the aggregate. Both conventional and polymer modified bitumen was used in the investigation. The mix design was based on volumetric (gyratory) and indirect tensile tests, on both wet and dry samples. The fatigue behaviour was evaluated at 20°C and 10 Hz, under strain control mode, by means of the conventional ap-proach, based on the reduction in the initial stiffness modulus, as well as using a dissipated energy method fo-cused on the Plateau Value concept. Between the different approaches used for the fatigue data analysis, it has been verified a qualitative consistency in the mixtures ranking, with a higher fatigue resistance presented by the polymer modified mixtures produced with RAP aggregates.

Carlotta Godenzoni, Maurizio Bocci and Andrea Graziani – Rheological characterization of cold bituminous mastics produced with different mineral additions / The use of CBMs is increasing because they combine economical and environmental efficiency. The mechanical behavior of the entire CBMs is strictly related to the behavior of the bitumen emulsion mastic. The present study focuses on the rheological characterization of two cold bituminous mastics produced in the laboratory with bitumen emulsion and two mineral additions: cement and calcium carbonate. For each mineral addition two different volumetric concentration rates (0.15 and 0.30) were tested.  The results showed that mastic composition strongly affects the viscosity and the mechanical response of the material. In particular, at higher temperatures and higher concentration rates phase separation was observed. The viscoelastic behavior showed an evolutive trend at longer curing times, especially for cold bituminous mastic prepared with cement. In addition, the time-temperature superposition principle was verified in the range of temperatures and frequencies investigated.

Edwina Saroufim, Clara Celauro and Nariman Khalil – Laboratory investigation into the modification effect of paving bitumen with different plastomeric polymers / Plastomeric polymers are known to be amongst the most used in bitumen modification. This work investigate the influence and degree of modification of several plastomeric modified bitumen in terms of rheological properties and morphology, investigated by means of fluorescent light optic microscopy. New processed and mixed polymers are introduced in the analysis. The results confirm that the fundamental properties and morphology of the modified bitumen are directly dependent on the type of polymer in use. Overall, the polymer-modified bitumen improves the original bitumen properties: remarkably stable blends were spotted with overall good performing properties. The microscope pictures provide useful information on the different type of interaction between the polymers and the bitumen.

Douglas Mocelin, Lelio Brito, Marlova Johnston, Vinicius Alves, Gracieli Colpo and Jorge Ceratti – Evaluation of Workability of Warm Mix Asphalt through the CDI and Air Voids / Warm Mix Asphalt (WMA) has grown in production over the past years due to its various advantages, such as reduced greenhouse gas emissions, lower energy consumption and reduced compaction temperature among others. The research has evaluated the workability of warm mixes accounting the Construction Densification Index (CDI), obtained in the compaction curve of a Superpave Gyratory Compactor (SGC) and also by means of air voids control achieved in Marshall specimens. The experiment tested a standard dense HMA and equivalent WMA varying both mixes on their production and compaction temperatures at -15°C, -30°C and -45°C of the reference HMA (143°C), totalling seven analysed mixtures. The results showed no workability variation on the mixes production but an improvement on the compactability; the latter being highly sensitive to surfactant presence and to temperature decrease. In general, the mixtures at reduced temperatures only reach the proper compaction using WMA surfactant additive. The tests carried out allow the conclusions that the addition of WMA surfactant additive enables a decrease in the compaction temperature of about, at least, 30°C without significant loss in workability and improving particle homogeneity in the mixes.