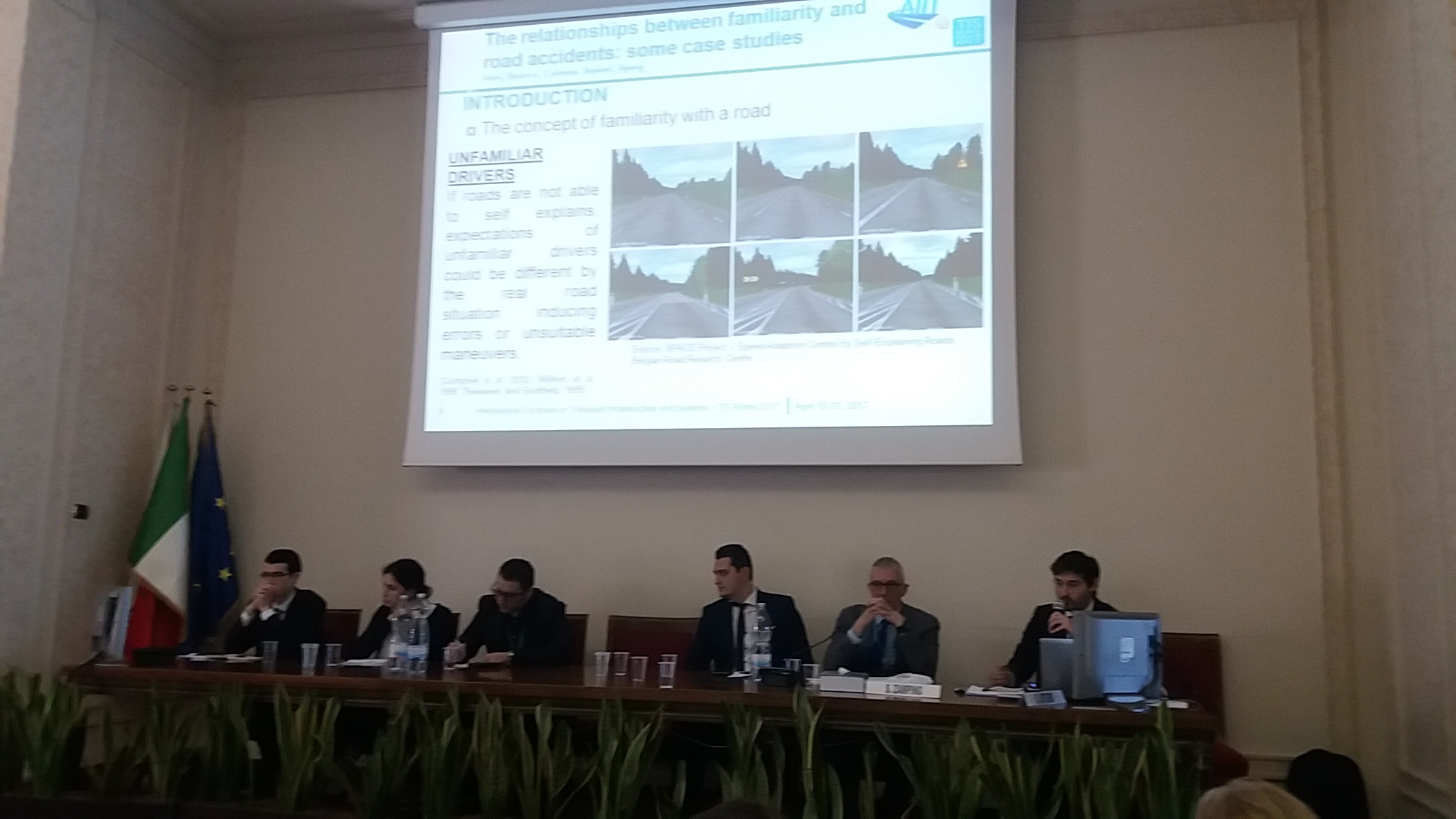 The 19th session addressed the issue of the complexity of the research about the human factors and the driver behavior. In particular, the multiple factors which reciprocally interact while driving were focused: internal factors (psychological traits and physical conditions to mention the main categories), and external factors (external environment, internal and external car devices) ecc. New methodologies of investigation were presented during the session.

Laura Eboli, Gabriella Mazzulla and Giuseppe Pungillo – The relationship between driving risk and drivers’ personal, physical and emotional characteristics/ Driver behaviour is the primary cause of road accidents for this reason it is necessary to carefully study the human factor in road system. This study investigate the relationship between personal traits and the level of driving risk taken by driver during a trip, and also the relationship between driving risk levels and physical and emotional characteristics of the driver. A survey was conducted to gain objective and subjective measures of the driving style, and subjective measures on the driver’s characteristics. Were identified 3 different levels of driving risk (low, medium and high) and at each level of risk was associated a score according to a numerical rating scale, as used for the subjective judgments. In this way, was possible to carry out a statistical analysis of the experimental data collected.

Paolo Intini, Pasquale Colonna, Eirin Ryeng, Nicola Berloco and Vittorio Ranieri – The relationship between familiarity and road accidents: some case studies/ Familiarity of drivers with the route belongs to the human factors less frequently studied as factor occuring of accidents. This paper investigated an accident database including two important rural Norwegian highways (E6 and E39), in order to inquire into the relationships between accidents and familarity, and divided accidents in two categories: “familiar accidents” and “unfamiliar accidents”. Than sites characterized by high percentages of unfamiliar accidents, as well as sites characterized by high percentages of familiar accidents were selected as case studies and further investigated. Based on this micro-analysis some conclusions about the possible relationships between accidents and route familiarity were made.

Joana Dourado, Ana Telma Pereira, Vasco Nogueira, Ana Bastos Silva and Alvaro Seco – Personality and Driver Behaviour Questionnaire: Correlational Exploratory Study/ This research explore the association between personality traits and driver behaviour. It takes into account a significant sample of the Portuguese population composed of 747 participants which participated in an online survey. To evaluate personality traits were used the NEO-Five Factor Inventory-20 and the Impulsive Sensation Seeking scale. The Driver Behaviour Questionnaire concerned assessing Infractions and aggressive driving (IAD), Non-intentional errors (NIE) and Lapses The results showed that IAD is significantly and moderately correlated with age, gender (male), years of driving licence, Impulsivity and Sensation seeking; NIE with Neuroticism and Impulsivity; Lapses with Impulsivity. These results reinforce that personality traits tend to affect driver behaviour and should be accounted in road safety assessment.

Davide Shingo Usami, Manuel Picardi, Maria Rosaria Saporito, Luca Persia and Isabella Corazziari – Identifying driving behaviour profiles by using multiple correspondence analysis and cluster analysis/ This study investigates aspects related to driver insecurity and the effects of the overall driving patterns. With this purpose a survey was undertaken among a sample of Italian drivers to assess driving distraction, aggressiveness, indiscipline and insecurity. Behavioural tendencies of drivers were studied through Multiple Correspondence Analysis and seven groups of drivers with similar behaviours were identified using Cluster Analysis. This approach allows the identification of driving behaviour profiles that could be used for driving training purposes.

Alexandros Oikonomou, Pavlos Tafidis, Pavlos Kyriakidis, Socrates Basbas and Ioannis Politis – Risk compensation in a changing road environment/ Thi research has the aim to identify the phenomenon of risk compensation, i.e. the tendency of road users to adjust their behavior in changing conditions of road environment. A questionnaire survey was conducted to investigate the existence or not of the phenomenon because of changes in the levels of road safety and the examination of whether aggressive driving behavior is associated with the adjustment of drivers’ behavior. The survey was taken place at Egnatia Street in Thessaloniki, Greece after the beginning of Thessaloniki’s Metro network construction. Results revealed that most of drivers who did not display the phenomenon were men, who were also found to have an aggressive behavior as well. Finally, it was observed that the appearance of the phenomenon is linked with driving experience and ability of user.

Stefano Zampino – The effects of the different uses of mobile phones on drivers: experimental tests on an extra-urban road/ It is well known that the alteration of the cognitive load due to the use of mobile phones influences on the driving behavior. In order to develop an easy method to evaluate the effect of phone devices’ misuse has been performed a direct experimentation on the road, based on a common GPS navigation system enabled to monitor the behavior of different groups of drivers undertaking different tasks while driving on an extra-urban road. During the driving tests were analyzed: the acceleration/deceleration of the vehicle along the longitudinal axis, the use of the braking system, the lateral position of the vehicle, and the deceleration in proximity of a road intersection. The results highlight some critical behaviors during the most complex tasks, with particular reference to the transverse position of the vehicle, a critical aspect in relation to the action of recovering the longitudinal trajectory.