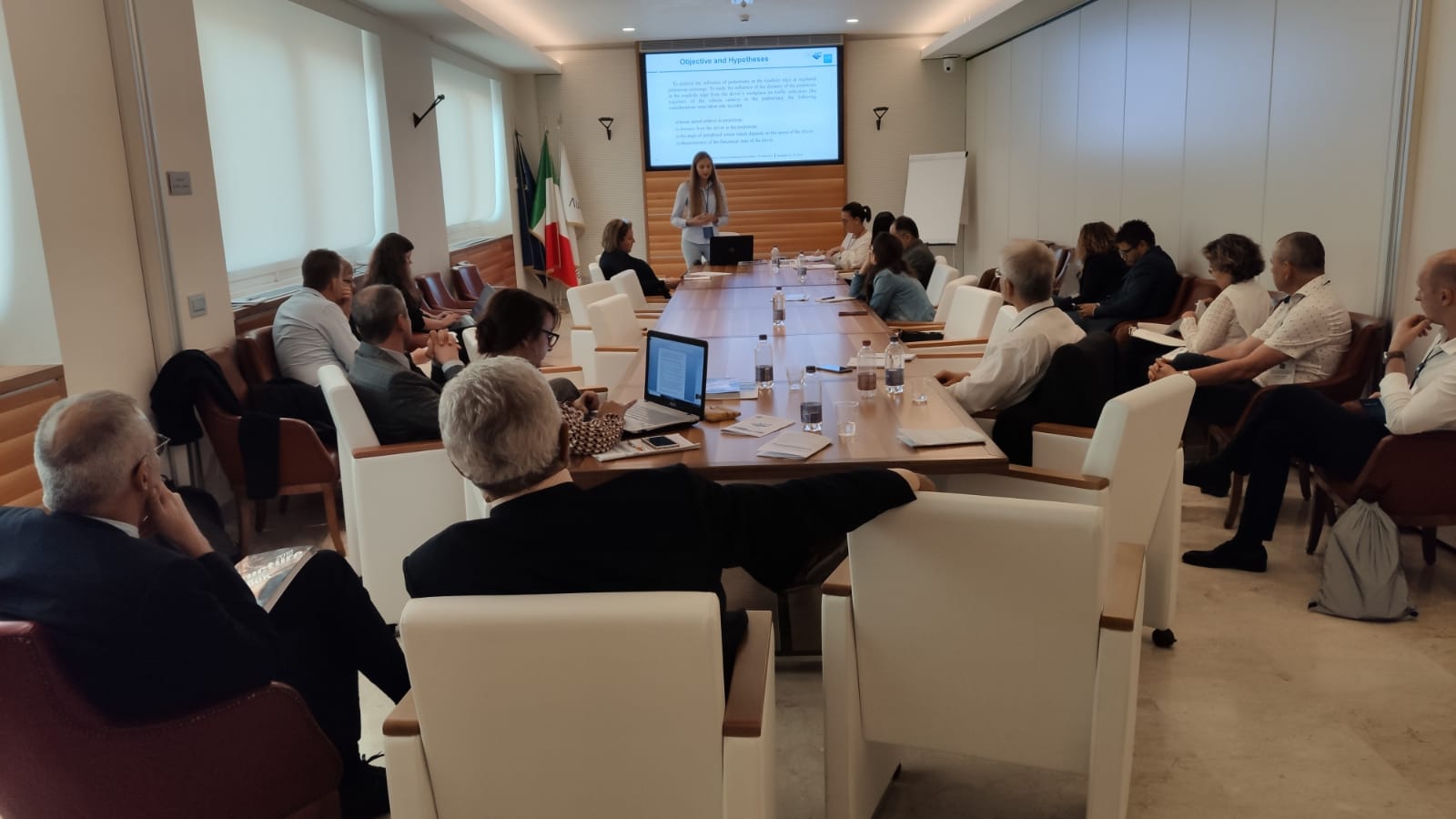 Keila Gonzalez-Gomez and Maria Castro- Analysis of sight distances at urban intersections. Vulnerable users’ approach / Roads elements are predominantly designed to safely accommodate motorized users. Urban roads and streets, unlike highways, contain very dissimilar users and might have higher points of conflict. Nowadays, due to the increasing use of vehicle sharing systems, personal transport devices and bicycle-friendly policies, some urban streets had to adapt to distinct users with different levels of vulnerability. Given the interest in increasing the use of alternative transportation methods, it is of great importance to make sure these car-centered designed roads provide securely for all users. So as to create a safe environment for these unalike users, common measures such as reducing speed limits, traffic calming interventions and modifications on the road geometry have been made in several urban areas. In this regard, taking into account the key function that proper available sight distance plays in road safety, the visibility of two distinct urban intersections was estimated.

The first one is a roundabout and the other is a T intersection, both located in Madrid. This analysis was performed considering the observer to be a pedestrian, a cyclist and a personal transport device rider. In addition to the evaluation of their crossing and stopping sight distances, and proper spotting of conflict points, their reciprocal visibility with drivers was assessed. Nowadays there are distinct ways of obtaining up-to-date information of the road scene and cycle lanes with sufficient accuracy and detail, hence it is possible to easily perform virtual analyses of distinct road parameters offsite. Here, the virtual verification of sufficient crossing, stopping and decision sight distances was performed utilizing a LiDAR derived digital terrain models and 3-D geometries. This evaluation’s main objective is to identify potential risk locations for these vulnerable users and propose measures that could improve the overall intersections’ safety.

Conclusions: increasing number of VRU with district levels of expertise are present in urban setting, operational urban roads require verification of visibilities for all users, not only car’s perspective .

Case study showed restricted ASD on the approaches, cyclists riding near sidewalk lack good sight of minor road, considered that not all sections comply with required SSD and for the end proactive search and identification of potentially risky locations is key to prevention.

Francesco Bella and Federica Nobili – Driver-pedestrian interaction under legal and illegal pedestrian crossings / Pedestrian crossing outside of a zebra crossing (jaywalking) is one of those pedestrian behaviours that may highly affect safety and operations. Unlike permissible crossings at zebra crossings, jaywalking events are not often anticipated by drivers, which may result in less driver reaction time and different vehicle operation dynamics.
The objective of the research was to study driver’s behavior as well as to model the interaction with a pedestrian, who was crossing at and outside (jaywalker) of designated zebra crossings. Data were collected through an instrumented vehicle study.
Sixteen participants took part in the survey. Each participant’s vehicle was instrumented with a video camera and a global positioning system (GPS) device. Each participant drove his vehicle along two streets of the center of Rome, during which numerous events of crossings at and outside the zebra crossing were detected. The acquired data allowed obtaining the driver’s speed profiles in approach to the pedestrian crossing.
The analysis was based on variables that were obtained from the speed profiles of drivers. The driver’s behavior under legal and illegal crossings was analyzed in terms of driver yielding rates and yielding types, relationship between speed and distance of the vehicle from the conflict point at the decision point, and for different times left for the vehicle to get to the conflict point at the moment the pedestrian reaches the curb as well as pedestrian origin (form the right or left).
Significant differences were detected in driver’s behavior during the interaction with the pedestrian crossing at and outside of the zebra crossing. The main results highlighted that the average yield rate to jaywalkers was lower than that to pedestrians at permissible crossings, the average deceleration rates were higher in the case of illegal crossing and driver yielding decision point to jaywalkers was closer to the conflict point.
The obtained results provide the basis for modelling interactions between pedestrians crossing at and outside of crosswalks and approaching drivers in a micro-simulation environment.

Finally, the origin of the pedestrian affected the driver yielding behavior. The percentage of NY was greater in the case of a pedestrian crossing from the right. The result seems to be due to a lower visibility of the pedestrian, which is hidden from the drivers by vehicles parked in the parking lane.

Silvia Rossetti, Michela Tiboni, David Vetturi, Michele Zazzi and Barbara Caselli – Measuring Pedestrian Accessibility to Public Transport in Urban Areas: a GIS-based Discretisation Approach / The proposed contribution aims at presenting a GIS approach that can help practitioners in assessing pedestrian accessibility in urban areas, with a focus on accessibility to public transport stops and stations (nodes).
This methodology represents an attempt to set up an integrated approach to urban planning and mobility planning, and provides a support in the decision-making process, with the dual aim of encouraging sustainable and non-motorised mobility and of improving public transport attractiveness.
The proposed methodology refers and refines some suggestions already described in previous works of the authors (see, i.a., Rossetti, Tiboni, Vetturi & Calderòn, 2015; Rossetti, Vetturi & Tiboni, 2017), and it is divided into three main steps:
1) Map the pedestrian permeability/ impermeability of urban spaces around public transport nodes;
2) Discretisation of the map in a grid of 3m x 3m cells which attributes derive from the Topographic Database informative layers (DBT), and application of an algorithm to calculate the pedestrian access time to the public transport node;
3) Map of access times to create detailed pedestrian isochrones, and calculate how many residents (or how many opportunities and facilities) in the neighbourhood are well served by the public transport system to measure accessibility levels.
The approach will be applied to the case study of three different metro stations in the city of Brescia, small area of 3m x 3m, focusing on the different results obtained for the different urban forms that constitute the city as a the modern city with open urban forms, the historical city centre and a residential neighbourhood.
Finally, the paper will provide a first comparison with similar results that can be obtained through vector-based tools that create isochrones from the road graph (e.g. Network Analyst tools).

Useful framework for decision support within SUMPs e.g. the creation of a pedestrian crossing in a specific point of the territory could bring a great benefit for the inhabirants.

Tiziana Campisi, Aleksandra Deluka – Tibljaš, Sanja Šurdonja, Antonino Canale and Marko Rencelj- Cycling traffic at turbo roundabouts: some considerations related to cyclist mobility and safety / The growing need for sustainable mobility has led the transport policy-makers as well as the population to use more of soft mobility solutions such as pedestrian and cycling traffic. Several European countries are implementing policies for total mobility with less motorization in order to reduce the negative environmental effects generated by industries and transport. For example, Copenhagen – Danish capital aims to motivate at least 50% of inhabitants to use bicycles instead of motorized modes by 2025. and many other EU cities are promoting similar policy actions. At the same time new, unconventional types of intersections are developed in order to ensure safer conditions not only for motorised traffic but also for pedestrians and cyclist. One of those is turbo roundabout, at-grade two-lane roundabout, introduced also in urban areas where heterogeneous traffic users are expected and on which traffic safety should be considered carefully.
This article aims to analyze the safety of cyclists in different traffic conditions at turbo roundabout with separated traffic lanes for cyclists. Through the evaluation of level of service and surrogate safety parameters, the advantages and critical aspects linked to turbo roundabout are highlighted. The research will be conducted on typical existing European turbo roundabouts with substantial variation in traffic flow:

Comparison of the results will allow a better understanding of functionality (level of service, traffic safety) of turbo roundabout in the presence of pedestrians and cyclists of different age.
In particular, different mixes of cycling traffic are examined and compared to the best understanding of the problems and mitigating their effects.
The comparison makes it possible to evaluate how the lanes of cyclists definable as continuous flow routes and the cyclo-pedestrian routes definable as promiscuous paths can make the monitored road geometry characterized by fewer conflicts due to variations in flows.
The aim of this article is to present possible solutions to enable the safer introduction of cycling traffic at turbo-roundabouts and help to define conditions (number of vehicles, number of cyclists, number of pedestrians) in which safety of cyclist is questionable and there is the need for the different solution.