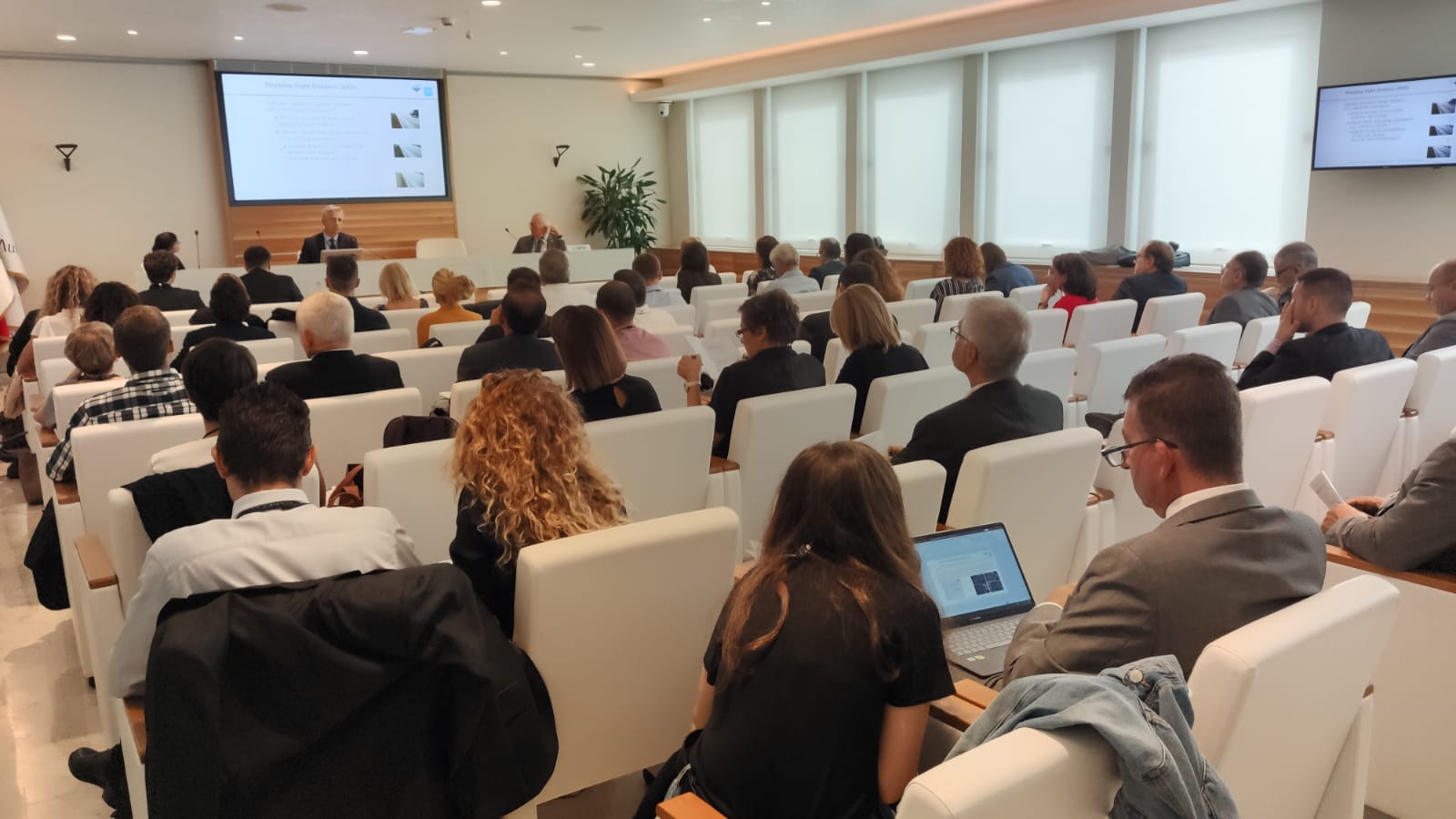 This 4th session chaired by Stefano Zampino focused on the Road Geometric Design, the assessment of it’s efficiency and the issues to improve more safety and sustainable approach.

Dmitri Nemchinov, Dmitry Martiakhin, Aleksey Kostsov, Alexandr Mikhaylov and Nemchinov – Research of accepted headways and visibility conditions on intersections / Studies conducted in the preparation of a new standard for designing intersections in Russia are presented in this article. The studies were carried out using unmanned aerial vehicles in accordance with generally accepted scientific methods. Using statistical processing of measurement results, data were obtained about the intervals accepted by drivers when making right and left turns from a minor road, and the distance from the edge of the main road to the driver’s eyes, waiting an interval in the main flow on the minor road. Acceleration and deceleration  on the turn lanes were also measured. Finally, the results of the study cleared the requirements for the geometric design of interactions of different types.The new design will include revised visibility requirements at the intersections as well as revised parameters of deceleration and acceleration lanes length calculations. The newRussian standards will be approved this year. The conducted studies allowed to formulate requirements for the length to the deceleration and acceleration lanes, based on the design speed at the approach to the intersection. This allows to reduce the required space for acceleration and deceleration lanes by speed management at the approach to the intersection on the main road. Results to the critical study allows to provide safe manoeuvres from the secondary road by speed management at the approach to the intersection of the main road when visibility at the intersection is limited. Finally, the position of the driver on the secondary road relative to the edge of the main road make it possible to set requirements for roadside width that are free from obstructed visibility.

Pasquale Colonna, Nicola Berloco, Paolo Intini and Vittorio Ranier – Geometric Design Issues and Safety Analysis of Two-way Rural Road Tunnels / Rural road tunnels may pose specific issues from several perspectives: mainly environmental, geotechnical/structural (excavation methods), economical. Geometric road design should be then conducted by trying to overcome all these issues, and at the same time, it should be compliant to relevant standards and regulations. This task is often arduous, since some of the prescriptions may not converge in the same direction and necessary trade-offs should be made among the different aspects of the problem. Nevertheless, the safety of road tunnels should be preserved, not only considering technological systems (e.g. ventilation systems, emergency exits and paths), but also regarding traditional road-safety issues related to road geometric features. In particular, in this study, some relevant concepts are firstly introduced, for the aim of showing how road tunnel geometric issues are considered. Given the broad fields of application of these concepts, this presentation is only limited to two-way two-lane road tunnels. After, some problems which may arise from the matching between road geometric prescriptions and other necessities are highlighted. Besides a general presentation of these inconsistencies, some issues are specifically addressed, which were scarcely treated in previous research. In detail, those relate to: 1) the possible need for variable road tunnel cross-sections in case of lane/shoulder widenings for the sake of improving visibility or for other reasons, or in case of lay-bys, 2) the possible need for climbing/overtaking lanes in case of steep downhill or uphill slopes. An attempt of addressing the mentioned problems is provided, based on relevant existing research and technical documents. In particular, the preliminary design stages leading to a “WES” (Without Enlargement Solution) solution are described. Hence, besides enlarging the research body in this specific field, the study is also potentially deemed useful for practitioners who have to face similar design problems. In conclusion, the safety of road tunnels should be prioritised while making design choices because a preliminary analysis related to two-way rural road tunnels has revealed that Italian tunnel crash frequencies/rates are comparable with similar open road samples. Then, differences were noted in the accident types and further research is needed for accident prediction model. Finally, some safety-related design issues are in contrast with environment, structural and economic problems and solutions were discussed for each of them by considering practical needs and other constraints.

Maja Ahac, Saša Ahac, Mihael Devald and Šime Bezina – Analysis of the functional efficiency of small town arterial thoroughfare (Case Study of Našice Town/ The main factors that affect the choice of the intersection type when constructing a new or reconstructing an existing intersection are desired traffic flow rate and achievable traffic safety. At the same time, a significant challenge is to find optimal solutions for (re)construction and traffic organization at intersections in settlements, especially in agglomeration centres, due to their specific and, in most cases substantial, spatial and traffic constraints.

This paper presents the examination of the functional efficiency of the introduction of roundabouts in the road network of Našice Town. As the location for the analysis, a section of county road 4168 is selected, which includes two consecutive 4-legged semaphored intersections. For the purpose of the investigation presented in this paper, these semaphored intersections are to be substituted with two single-lane roundabouts. Conceptual design of these roundabouts includes prescribed performance checks: swept path analysis, speed, and visibility checks. Finally, the rating of the analysed road corridor functional efficiency and dynamics of intersections reconstruction is given based on the defined levels of service for the current state and the intersection reconstruction proposals.The introduction of mini urban roundabouts in Našice allows the reduction of the average control delay per vehicle for the most critical path as much for 5 minutes and the reduction of the road corridor width (existing lanes could like that be converted into green belts, parking areas or sidewalks). The criteria given in national standards on urban mini roundabout need to be supplemented with unstandardised roundabout design and performance check procedure. Finally, combination used resulted an optimal intersection design in the sense of respecting the previously mentioned spatial limitations.

Stergios Mavromatis, Vassilis Matragos and Panagiotis Papantoniou – Crest Vertical Curvature Safety Assessment through Variable Grade Stopping Sight Distance / Sight distance is the length of roadway ahead that is visible to the driver. The minimum sight distance known as Stopping Sight Distance (SSD), is a highway geometric design element of fundamental importance. SSD must be provided at every point along the road surface, thus affecting critical road design parameters which directly impose economic considerations on both new road designs as well as road improvement projects.

At the same time, SSD is a key control element which directly affects the suggested values of crucial road design parameters. Although there is a significant difference in SSD values between upgrades and downgrades, many Design Policies ignore the grade effect during vehicle braking on variable grades. Such a case is experienced during the determination of crest vertical curvature rates where the relevant SSD values are extracted assuming leveled road geometry. The paper investigated possible deficiency of this approach, regarding cases where the length of the vertical curve exceeds the control SSD values.

More specifically, SSD calculation is addressed on variable grades during the braking process through a recently developed process that relates the point mass model and the laws of mechanics.

For a wide range of design speed values, charts illustrating the required SSDs were drawn as a function of negative ending grade values related to control crest vertical curve rates, as adopted by various road design guidelines; namely the Italian (DM, n.6792, 2001), the Greek (OMOE-X, 2001), and the US (AASHTO, 2011).

Šime Bezina, Vesna Dragčević and Ivica Stančerić – Approach Alignment Impact on the Geometric Design of Urban Roundabout / Today the existing three-leg and four-leg intersections are often replaced by roundabouts. Compared to conventional intersections, application of roundabouts in the road network has many positive effects, such as increased safety and intersection capacity, reduced maintenance costs and air pollution. However, in some cases these benefits may be annulled due to the poor geometric design. One of the prerequisites for the optimal intersection design is the extended approach centrelines have to intersect at the centre of a roundabout. The alignment of the approach centrelines relative to the centre of a roundabout plays an important role in roundabout design. It affects the amount of deflection (consequently the ability to control driving speed through an intersection), the swept path of design vehicle and visibility. In practice, due to spatial constraints and increasing property development along the road, this precondition cannot always be satisfied. This comes to the fore particularly in urban environments, where the reconstruction of the road centreline is usually not possible. In light of the above, this paper investigated the impact of the radial offset of approach centreline (the centreline does not pass through the centre of the intersection) on the geometric design of urban roundabouts. The research carried out through several theoretical examples of small and medium sized urban roundabouts with various external radii. In conclusion, on the urban road network, there is often a need for the construction of roundabouts with approach axes which don’t pass through the roundabout center and they don’t intersect the right angle. The research results showed that the rotation of an approach axis has an impact on the geometric design of roundabout (by rotating the left the required entry decreases while the required exit width increase and by rotation the approach axis to the right required entry width increases and the required exit width decreases). Finally, the values of the rotation angle of approach axis determined in this study are considerably higher than the values prescribed by the guidelines and recommandations and the results obtained should be compared to the results obtained on real exemples of roundabouts with rotated approach axis to bring the final conclusions.