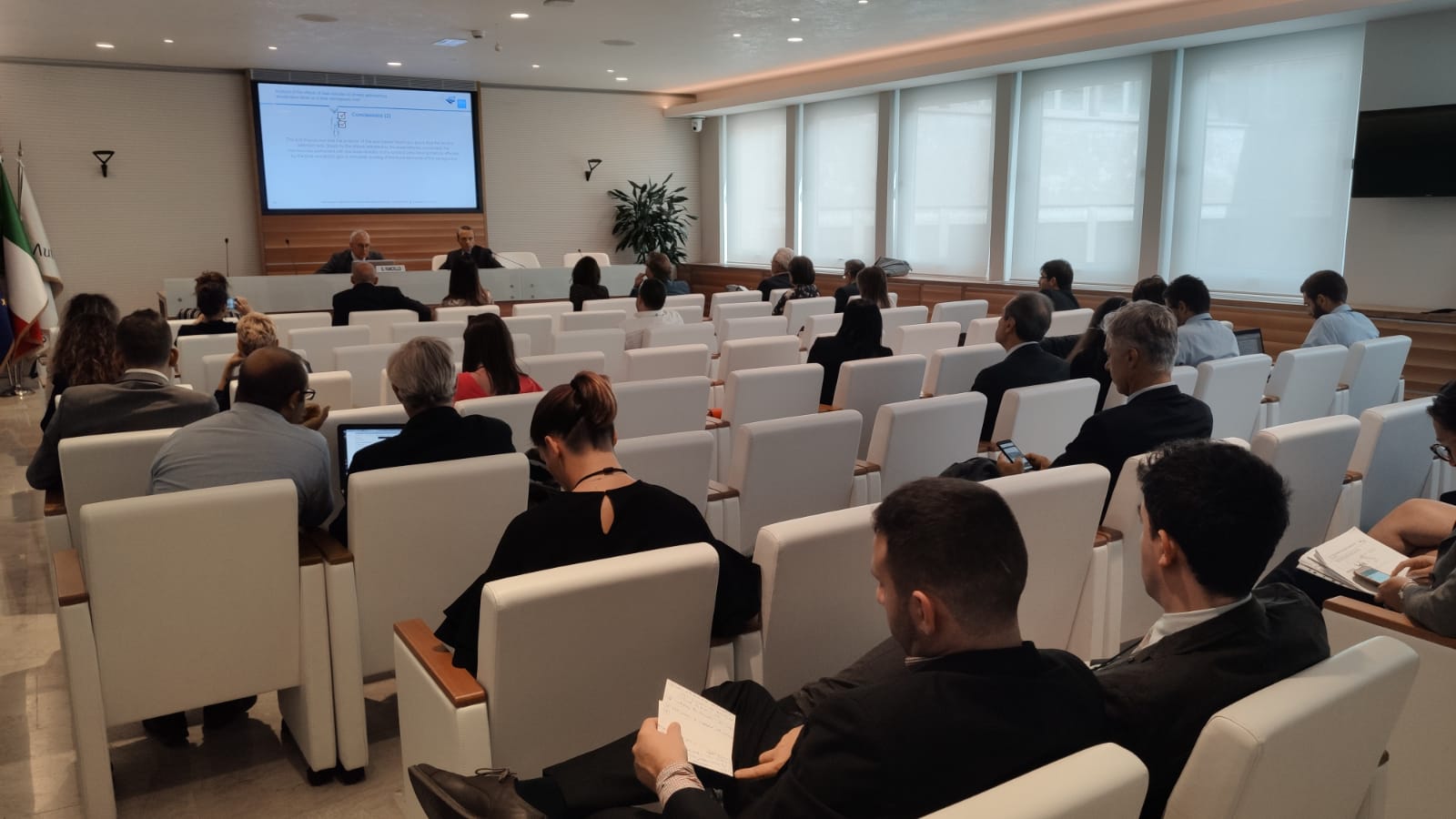 This 5th session chaired by Gianfranco Francello talks about human behaviour in front of particular road design and the new technologies to mesure the human factor in road safety.

Stefano Zampino – Analysis of the effects of lead vehicles on drivers approaching deceleration lanes on a dual carriageway road / The aim of this research is to understand the effects of the presence of lead vehicles on the driver behaviour in proximity to unattended visual elements of the road platform as the diversion lanes of interchanges. In order to comprehend and measure the effects of the moving vehicles in the visual scene, a group of nine drivers drove, under different conditions, a test-car on a dual carriageway road in correspondence to the diversion lanes of two different interchanges. The driver behaviour was tracked, recorded and analysed by electronic devices and digital cameras installed on the test-car.

The results of the tests show how the drivers tend to operate their vehicle in presence of lead vehicles located in the centre of their visual field and how the presence of moving objects affects the perception of the road environment, the diversion manoeuvres and the driving trajectories. This paper demonstrate how the presence of vehicles in the visual scene affects the goal-directed attention and the time for anticipation needed to set the diverging manoeuvre. The exit trajectories and the analysis of the eye tracker heatmaps prove that the drivers attention was drawn by the stimuli inducted by the lead-vehicles movement the manoeuvres performed with the lead-vehicles in the forward view were somehow affectedly the time needed to gain a complete reading of the fixed elements of the background. Although some differences due to the different geometry of the ramps were observed. The tests proved that the driver behaviour during the tests depended not only on the geometry of the road but also on the external factors affecting the cognitive process and interfering with the driver identification on the road environment.

Dario Bellini, Maria Carmela Iaconis and Emilio Traettino – Speed limits and road warning signs management as aid for driving behaviour / The definition of speed limits of a road section with limits that are lower than those legally allowed is an administrative measure that significantly impacts on the road on the driving behaviors. Strict speed limits are often considered inappropriate compared to the planimetric and altimetric layout of the route, and considered instrumental to repressive campaigns aimed at supporting local government finances. The inappropriate use of road signs, as well as the excess of roadside prohibitions, may induce unsafe driving habits and infractions, affecting the efficacy of the signage with respect to the potential risks on the road. On the other hand, the speed limit should above all aid driver’s perception, facilitating the correct interpretation and evaluation of the layout and conditions of the route, in order to limit adverse driving events. It was investigated the relationships between the route characteristics, the specific road maintenance conditions and the warning sings imposed by the highway code on the driver’s behaviors. It was also examined and assessed the management of the speed limits in order to harmonize roadside prohibitions, and promote their optimization to enhance a correct driving behavior.

The analysis is based on statistical relationships between the car speeds that are actually measured in specific road sections by continuous mode controllers, the speed limit on those routes, and the real planimetric and altimetric layout of the route. The study was focused on the extra-urban road sections of the Tuscan region for which driver speed data were available. Results highlighted the relationship between the 85th percentile speed and the planimetric and altimetric layout of the route, providing a rational approach to harmonize and set the road speed limits that optimize driving behaviors. The result is that the detected V85 values differed significantly from the posted speed limits and speed values deduced from the speed diagrams correlated well with the measured V85. This findings could be helped with a correct disposition of warming signal improving the overall road safety levels.

Natalia Distefano, Salvatore Leonardi, Giulia Pulvirenti, Richard Romano, Natasha Merat, Erwin Boer and Ellie Wooldridge – Physiological and driving behaviour changes associated to different road intersections / Road traffic injuries claim more than 1.2 million lives each year in the world and have a huge impact on health and development. It is commonly acknowledged that the human factor and the interaction between the human factor and the road environment are among the most common causes of road accidents. Intersections are among the most complex road environments: their geometric and traffic characteristics weigh the driver workload, affecting the driving behavior and consequently the risk of accident. This study intends therefore to contribute for a better understanding of the relationship between different types of intersection and the human factor. The ultimate aim is to understand if and how the geometric characteristics and the road furniture of intersections affect the drivers’ stress level. Physiological data can provide a real-time assessment of the driver’s stress level. Electrodermal activity, blood volume pulse, heart rate and heart rate variability were therefore collected continuously during real-world driving tasks. The driving study took place on a test environment based at Cranfield University and surrounding roads. Twenty participants from 28 to 50 years old were involved within the study. The analysis focused on six at grade intersections (four roundabouts and two T-intersections) situated on the study location. The results provide information on how different intersections affect drivers’ behavior and recommendations on how to improve road intersections design. An analyse of the skin conductance show that on the roundabout the driver is more anxious (2.1 time more than in e T-junction). In this case the stress occasioning is a positive stress because increase the attention of the driver. So, this results show that intersection is the most complex road environment, conversion of fonction into roundabout allows reduction of number of accident, traffic safety.

Navid Ghasemi, Ennia Acerra, Andrea Simone, Claudio Lantieri, Hocine Imine , Valeria Vignali and Giulio Dondi – Innovative technologies measurements to integrate Human Factor in Road Safety Review / Urban arterial roads provide high-speed passage to improve traffic in urban areas but, unlike freeways, they consist of ramps, roundabouts or special characteristics due to the limited space in the urban (semi-urban) environment, which may increase the accident probabilities. The existing studies on road safety use the Road Safety Review to evaluate road geometry, identifying high accidents concentrations sections and classifying the road network based on these measures. These results are based on the point of view of experts and they consider deeply the driver interaction with the road infrastructure and the human factor. The present study aims to investigate the road safety of an urban arterial road, integrating traditional checklists with innovative solutions applied in an experimental site test. The driver visual behavior on the road has been recorded by head-mounted eye tracker that is used to find the gaze behaviour on different road elements. The vehicle used for the test was equipped with satellite positioning (GPS), inertial measurement unit (IMU), vehicle CAN data reader and video recorder, to monitor the driver behavior and vehicle parameters during the track. The results showed that the use of the innovative techniques for observation of the driver behavior on the road can improve the Road Safety Review (RSR), by identifying new hazardous points based on the driver’s response to the road environment. The RSR identified were the high effective speed, the insufficient visibility of signs, a damaged pavement, the presence of speed trap and an insufficient visibility in the intersections. The driver response to the road environment can provide additional info to evaluated the state of the infrastructure.

David Vetturi, Michela Tiboni, Giulio Martenini and Michela Bonera – Use of eye tracking device to evaluate driver’s behaviour and the infrastructures quality in relation to road safety / With the use of the eye tracking device allows to movements it is possible to provide important elements for understanding the nature of the task of driving, recording and analyzing eye movements. This paper explained how analysing the behaviour of the drivers through the eyes movements allow to evaluate the infrastructures quality in terms of road safety.Driver behaviour analysis have been conducted in urban areas, examining the observation target (cars, pedestrians, road signs, distraction elements) in quantitative terms (observation time). In particular, rotary intersections and rectilinear sections of high-traffic urban road have been examined. The behaviours of numerous drivers were examined to have a significant statistical variability.

The analyses carried out have made it possible to assess how, different types of infrastructure allow, in terms of safety guaranteed by their building typology, to influence the behaviour of road users. In this research seven young drivers were analysed on a urban road in Brescia. The percent of attention of the subject in three different junctions was evaluated. In average, our attention is focused 74% of our time on the road and 26% on distraction element as sky, tree, peoples, … This study also shows that the crossing of a complex intersection limits the speed, leaves the time level of attention unchanged and increases the percentage of attention, indicating a good design of the infrastructure. conclusion, a methodology to analyse the behaviour of different subject in different driving conditions has been proposed. The eye-tracker has been performed in urban road where speed and level of attention are strongly related with infrastructures and road design. In particular, it emerges how the level of attention can be used as a significant indicator of the level of safety offered by the road infrastructure. On this research only quantitative variables were considered and these were analysed from a statistical point of view. Further analyses will also be conducted in the extra-urban area.

Giuseppe Cantisani, Giulia Del Serrone and Giorgia Di Biagio – Results of Micro-Simulation Model for Exploring Drivers’ Behaviour on Acceleration Lanes / This study examines drivers’ behavior on acceleration lanes, close to the convergence between the main and the secondary traffic streams, by means of traffic micro-simulations. Experimental data collected videotaping two acceleration lanes in Italy have been used to initially calibrate a simulation model and to validate it subsequently. The analyses had focused on both vehicles coming from the on-ramp, in terms of entrance points dispersion into the main traffic stream along the acceleration lanes, merging speeds, and acceleration rates reached, and on vehicles driving on the freeway right lane, in terms of vehicles categories, traffic volumes, and speeds. The phenomenon has been implemented in the TransModeler traffic simulation package and several scenarios have been considered, changing the traffic composition and the speeds at which drivers enter the acceleration lane from time to time. This led to obtain a large number of case studies, where the mutual influence between the two flows combined with the vehicle performances and the psychophysical characteristics of drivers, have led to an initial evaluation of the main variables in respect of which the required length for the specialised lanes depends. Road design guidelines’ standards have been later compared to what was observed in reality and it can be claimed that the microscopic traffic model in some cases confirms the standards of road design guidelines while, in other cases, contradicts them. To conclude, it’s possible to calculate the required length of the acceleration regarding first at the main traffic flow could be represent on a graphic, separate in four different categories, with the vehicle speed value at the exit of the ramp on the x axis and the distance on the y axis. Once the vehicle speed value at the exit of the ramp is established, the curve representative of a given value of the secondary traffic flow can be reached moving vertically, proceed horizontally, until the ordinate axis representative of the length of the acceleration lane is reached. This length must guarantee that drivers can merge into the target lane causing minimal disturbance for the main traffic flow.