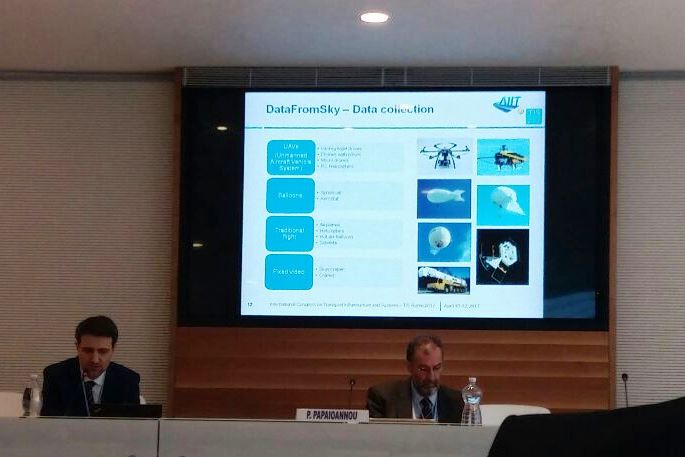 Professor Panagiotis Papaioannou chaired the 5th session of the TIS Congress, focusing the issue of mobility planning. The use of modern Information systems, allows the application of more and more sophisticated traffic models  which were presented and analyzed during a very thought-provoking session.

Raffaele Mauro, Selene Cattani and Marco Guerrieri, A model to evaluate heavy vehicles effect in motorway traffic flow – Highway operating conditions are also determined by interactions between passenger cars and heavy vehicles in the flow.  The authors examined some traffic data analyses of the Italian A22 motorway and then presented a closed-form traffic model for heavy vehicles via the theory of queues.  Some applications of this model  were displayed for operational purposes and a critical evaluation of the results is also made in comparison with some experimental evidence.

Nurit Oliker and Shlomo Bekhor, A demand based route generation model for transit network design – Existing methods for transit route generation are based on variations of shortest path algorithms. However, the connection of each O-D pair by its shortest path ignores all other O-D pairs. Thus, these methods may yield routes that miss high demand corridors. The idea of the proposed model is to form routes on corridor links, with high overall demand, in order to strengthen the service attractiveness. These routes may accommodate trunk lines with high frequency that serves a large volume of passengers.

Sara Oliveira, Luís Vasconcelos and Ana Bastos Silva, Automatic calibration of microscopic simulation models for the analysis of urban intersections – The study  focused on the application of an Aimsun microscopic simulation model to a selected case study intersections. This involved the development of an optimization based calibration methodology, coupled with a sensitivity analysis. The optimization framework was implemented in Matlab using the pre-defined genetic algorithm in the optimization extension. With the models properly calibrated and validated, the performance indicators were obtained and conclusions about their approximation to reality were drawn. It was found that traffic conditions at the signalized intersection can be replicated much more easily that at the roundabout and that the automated calibration procedure does not lead to robust parameter values.

Dusan Jolovic, Soheil Sajjadi, Aleksandar Stevanovic and Peter Martin, Evaluating the capability of deterministic and stochastic simulation tools to model oversaturated freeway operations – FREEVAL is a macroscopic/mesoscopic tool taht enables users to implement HCM based freeway analyses quickly, for both undersaturated and oversaturated conditions. Vissim is a microscopic traffic simulation tool that enables users to model real world traffic conditions with high levels of accuracy. The methodologies behind the two tools were compared and an explanation and discussion of their outputs in terms of density and space mean speed was offered. The assessment reveals that both tools are capable of replicating oversaturated conditions reliably after the calibration/validation process.