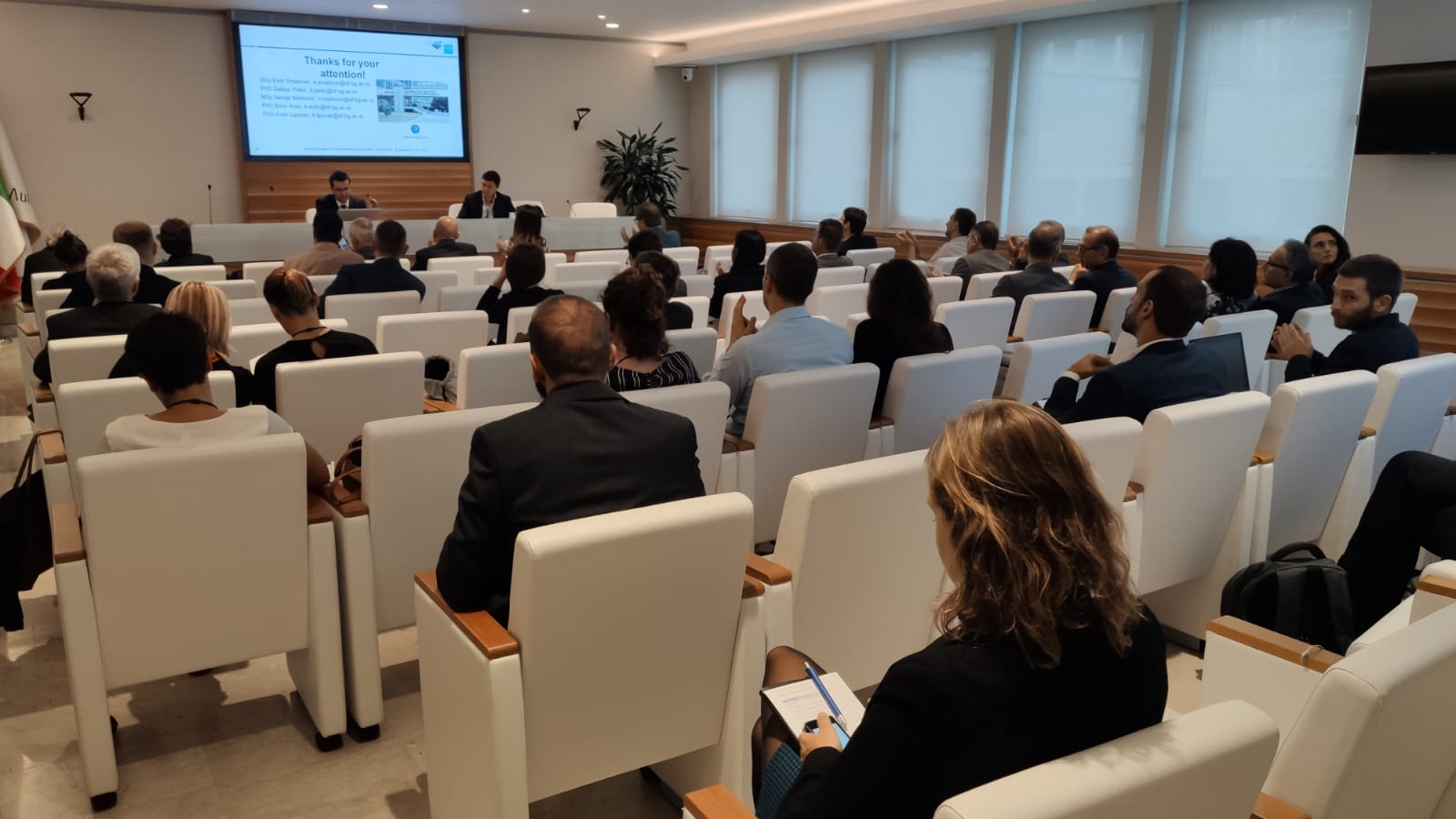 This 6th session chaired by Fabrizio d’Amico focused on the psychological, physiological and natural perturbations that may affect our driving behaviour.

Brayan González-Hernández, Davide Shingo Usami, Oleksii Prasolenko, Dmytro Burko, Andrii Galkin, Oleksii Lobashov and Luca Persia Persia – The driver’s visual perception ressac to analyze pedestrian safety at twilight / The visual perception of the driver issue in conditions of nightfall is considered in the paper. The visual appearances of an object like pedestrians on the street was studied. Researched were conducted on an uncontrolled pedestrian crossing of highways in nightfall conditions on a data collection of 6 drivers with driving experience between 3 and 7 years. During the driving period, electrocardiogram on the driver was recorded. The study shows that the reaction time depends on driver’s emotional stress and lighting. In poor lighting conditions the emotional stress increase in drivers, increasing the driver reaction time. A rapid descrease in lightning occurs 10-15 minutes after sunset, which increase the risk for pedestrian. In order to reduce this risk it is necessary to use speed regulation in the pedestrian zone or switch on street lightning 10 minutes after sunset in the autumn-winter periods.

Emir Smailović, Dalibor Pešić, Nenad Marković, Boris Antić and Krsto Lipovac – The Effect of Changes Alcohol Limits on Involvement Drivers Under Influence of Alcohol in Traffic Accident / This paper talks about the relationship between alcohol-related crashes, the mainly concerned people and the consequences. The discussions confirmed the real relationship between Driver Under Influence (DUI) and fatalities. Male DUI drivers account for nearly twice as much as the share of DUI female and drivers of working machines are most frequently DUI followed by bicycle riders and riders of powered two-wheelers. Young drivers or less experimented drivers are also most often involved in DUI accidents. Furthermore, we can observe in 2009 a significant drop of DUI due to the effect campaign and media attention.

Jelica Davidović, Dalibor Pešić, Krsto Lipovac and Boris Antić – The Significance of the Development of a Road Safety Performance Indicators Related to Driver Fatigue / The main of this paper is to define road safety performance indicators related to the fatigue of professional drivers and to show their significance. 20%-30% of MVAs are caused by fatigue and 40% of them is due to professional drivers fatigue. The contribution of this paper was to identify the indicators which can be monitored on a daily basis in transportation compagnies. On the basis of a broad set of road safety performance indicators related to fatigue, we can isolate a set of indicators which refer to all drivers and which can be precisely, reliable and simply monitored on all level as : percent of night of efficient sleep quantity the previous six mouths, percent of sleeping hours during the night, percent of morning when drivers feels fatigued after walking during the last six months and percent of driver diagnosed with a sleep disorder.

Marco Bassani, Leonardo Rossetti and Lorenzo Catani – Traffic accident pattern modification as a result of a 30km/h zone implementation. A case study in Turin (Italy) / This paper talks about the consequences of the modification of a urban pattern into a 30km/h zone implementation in Turin (Mirafiori Nord) and the case was studied from 2006 to 2016 (2006-2008 before the transformations). Also other structural modification as new gates, chicanes, raised intersection area and reduction of lane width were created in this zone. This new road pattern expected to be sustainable and safety for urban mobility of Vulnerable Road Users (VRU) cause in average, 65% of fatalities involved VRU. The results shows a significant decrease of accident for not VRU only and the results concerning the VRU are not really significative and also slightly increased in the period from 2014 to 2016. So it’s important to note that a robust metodology for assessing spatial-temporal changes in crash patterns alter traffic calming measure installation.

Kateřina Bucsuházy, Michal Belák, Marek Semela, Martin Bilík, Pavel Maxera, Robert Zůvala and Vlastimil Rábek – Analysis of driver behavior in real traffic / The aim of this ongoing research has been the analysis of driver visual behavior in real road traffic. The paper deals with analysis of duration of selected actions performed by drivers and analysis of the influence of elements around the road on driver behavior. For the purpose of this study eye-tracking technology has been used. Eye-tracking method is used to measure motion of an eye relatively to a head. Fixation analyzation is a eligible method of minimizing the complexity of eye-tracking data while retaining most essential characteristics for the purposes of understanding cognitive and visual processing behavior. In order to objectify the obtained values, the results were statistically analysed. This study shows that average value of total off-road glances regarding to the checking situation on vehicle mirrors is 1.2s and the vehicle inspection at the rear is longer than for vehicles at the front. It was also shown that the utilisation of an audio-visual navigator is preferable respect to a simple visual navigator because the average attention time is respectively 0.6s and 0.9s. The results of this study could also be beneficial for the forensic examination.

Nikiforos Stamatiadis and Adam Kirk – Use of technology based strategies for older driver risk mitigation / Older drivers present a unique challenge to transportation system throughout the world. Studies have shown that older drivers have high rates of crashes and injuries. In fact, people over 75 are 2.46 times more likely to be involved in an accident. However, maintaining the ability to drive is very important to older persons, and the solution must balance older driver mobility and safety. Investigation of older driver crash patterns has shown that older drivers are overrepresented in certain crash types, such as left turn crashes and crashes involving complex maneuvers, than other driver age groups (3 times more involvement in left-turns). The relatively recent integration of mobile technology solutions, as the increasing familiarity of older driver population with technology, especially in younger cohorts, presents a unique tool set of potential solutions. The objective of this research is to identify automated route finding that may be used by older drivers to identify “safest” routes through increased risk assessment and guidance on route choice, time of travel and required maneuvers at intersections, to reduce the overall crash representation of this driver population. This research used the ArcGIS Network Analyst extension to compare the distance and turn costs associated for optimized routes with those of routes along which left-hand turns were either minimized or prohibited. The results showed that it is feasible to identify safer routing choices based on the strengths of a driving population. These “safe” routes are also significantly differentiated from routes optimized by travel time alone. Moreover, safe routing may be quantified easily from readily available information sources, such as by limiting or eliminating the need to make a left turn.

Paolo Infini, Nicola Berloco, Pasquale Colonna, Damiano De Gennaro, Eirin Rien and Vittorio Ranieri – Self-Reported Route Familiarity and Road Safety Negative Outcomes: First Results from a Transnational Survey-Based Study / This research shows the influence of drivers’ route familiarity on road safety. In particular, the familiarity of drivers was possibly related to some negative safety outcomes such as speeding, violations, distraction and inattention. On the other hand, drivers unfamiliar with the route (especially if foreigners) were related to over-involvement in specific types or at-fault crashes. Drivers’ route familiarity is mainly identifiable as based on both frequency-based self-reported scales (from having never traveled on a given route to more than daily) and distance from residence scales (e.g. foreign or driving in the same town). Previous research by the authors on the same topic was mainly conducted by analyzing behavioral changes based on on-road tests and differences between familiar and unfamiliar drivers’ involvement in crashes based on database. In this study, a novel perspective was used, by relying on surveys. The degree of familiarity with given routes was self-reported by the drivers, who have answered to a specifically designed survey. Other questions were related to other safety issues and negative outcomes. The main negative outcomes considered were accidents and sanctions/violations experienced by the drivers in the more recent past two years from the survey. The familiarity of drivers with the routes on which accidents or violations occurred was asked as well, in order to find relationships between familiarity and negative outcomes. The survey was submitted to both Italian and Norwegian young drivers, to explore also possible cultural and geographic differences of the investigated phenomenon.

Results of this study shows that half of person says that they have not a different behaviour in familiarity and no familiarity road but person feels generally more confident on habitual routes. Norwegians report higher behavioural differences and confidence on the habitual routes compared Italians. For the moment, possible relationship between familiarity of drivers. The first results from the study are presented in the article, by focusing on the relevant aspects emerged from both the Italian and Norwegian surveys. Results are discussed in light of previous research in the same field. In conclusion, survey results useful to reveal stated differences between behaviours on habitual and generic routes. Most of the accidents occurred of the familiarity roads for both (all in the Italian case). Several fines occurred on roads rarely or never travelled before (especially based on Italian sample)It may seems that familiarity with habitual routes may foster accident involvement and prevent or reduce the occurence of fines.