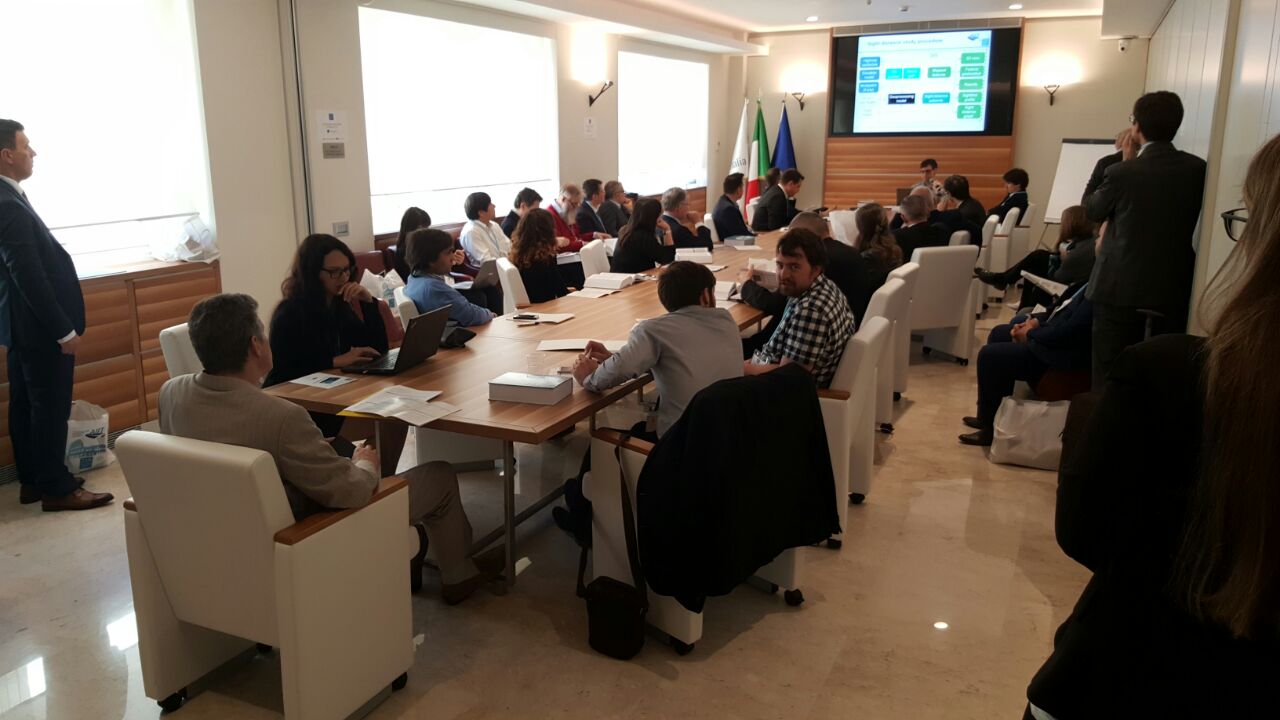 The most recent design models and international specifications were discussed during the 7th session entirely dedicated to Road design topics and chaired by professor Felice Giuliani former director of the AIIT Studies Centre and former president of the Italian SIIV association. The session focused on new design methodologies for road geometry and on recent intersection design specifications, highlighting the importance of a safety-based approach.

Maria Castro, César De Santos-Berbel and Luis Iglesias – A comprehensive methodology for the analysis of highway sight distance / The author presented as one of the main elements of geometric design, sight distance must be considered carefully for the safe and efficient operation of highways. An application developed on geographic information systems (GIS) was conceived for the three-dimensional estimation of available sight distance (ASD) on highways, as opposed to conventional two-dimensional techniques, which may underestimate or overestimate the actual visibility conditions. It is capable of computing the ASD of a highway section given the driver’s eye height, the target height, the vehicle path and an elevation model. The outcome can be studied in detail with the aid of the tools and capabilities developed, including sight distance charts. The influence of the input features, such as the nature of the elevation model, it’s resolution and the spacing between path stations on the results accuracy was analyzed. The interpretation of results is also essential to explain sight distance deficiencies and provide insight into the effect of roadside elements on those results.

Raul Almeida, Luís Vasconcelos and Ana Bastos Silva – A speed model for curves of two-lane rural highways based on continuous speed data / An inconsistency in road design can be described as a geometric feature or a combination of features with unusual or extreme characteristics that may lead to unsafe driving behavior. A handful of methods and approaches have been trying to model design consistency. One of the most used criteria to evaluate highway design consistency is based on operating speed measurement. The present Portuguese design manual proposes a method to evaluate the geometric design consistency that is too simplistic, based on the estimate of an 85th percentile speed profile. It is assumed that the speed on the curve is uniform and the values of the acceleration and deceleration are based on constant values that relate, concerning the acceleration, to a slight pressure on the accelerator pedal, and in the case of deceleration, to hardly any brake solicitation. In this context, the author presented the development of a new speed profile model for two-lane rural highways. The model presented is based on a microscopic approach and relies on continuous operating speed profile measurements, instead of fixed location speed variables. The field measurements were recorded using a vehicle equipped with a precision datalogger that combines video footage with kinematic variables. The resulting database allowed to differentiate the driving dynamics of a set of drivers on two-lane rural highways under a wide range of geometric conditions. It was found that some assumptions of tradition speed models do not hold and that the proposed model fits in a very satisfactory manner to the behavior of the driver in free-flow conditions.

Pasquale Colonna, Nicola Berloco, Paolo Intini, Antonio Perruccio and Vittorio Ranieri – The Method Of The Friction Diagram: New Developments And Possible Applications / Road friction is a crucial matter in road design, maintenance and operation since it relates to safety issues. In fact, if the vehicle requires more friction than the ability of the road to provide it, then a loss of friction between tire and road occurs The phenomenon of road friction depends on several features belonging to different areas: the road, the vehicle and the environment.  All these influences were considered in new method developed by the authors: the Friction Diagram Method. The method explained is based on the estimate of the safety level of a road by calculating and comparing for each road section the friction force that the road can potentially provide to a driving wheel “FP” with the resultant force acting on it “FD”; where: “FP” is a measure of the “Friction Capital” available to the vehicle, while “FD” is the part of “Friction Capital” used by the vehicle. The model on which the Friction Diagram is based was explained in previous papers and here it will be briefly summarized. In the paper, the possible applications of the Friction Diagram to real cases will be shown. Different vehicles are considered, with particular regard to the Design Critical Vehicles (DCVs), the vehicles presenting the worst performance for each combination of both the horizontal and vertical alignments. On the other hand, diffferent environmental characteristics, speed motion conditions and road geometry features are considered as well. The impact of each variable on the output of the model, represented by the percentage of friction used (% Fused) is shown through the use of a sensitivity-uncertainty matrix. Furthermore, some considerations about the maximum safe speed with regard to the risk of skidding in each combination of road geometry and vehicles are given.

Giuseppe Cantisani and Giuseppe Loprencipe – Reference Trajectories of vehicles for road alignment design / The object of the paper presented il focused on the geometric design principles traditionally hypothesize that trajectories of vehicles can be assumed corresponding to the road longitudinal axle of the road or, more correctly, to the median line of each allowed lane. In real conditions, instead, vehicles always travel along trajectories each other different; the variability is due to dynamic actions affecting the motion and, in a great measure, because the control of vehicle trajectories, in care of users, is not perfect. In order to consider if the theoretical models can be effective for safety and comfort verifications, performed in design process, it is important to evaluate how a reference trajectory can statistically represent the whole population of road users. In fact, the difference between a real trajectory of a generic vehicle and the theoretical one can emphasize the safety problems related to geometric characteristics of roads.To deal with these problems, it appears interesting to analyse the dispersion of trajectories in various road sections; in this way, in fact, the “reference trajectory” along a road alignment can be recognized by means a statistical approach. Starting from surveys on real road elements, the author presented a method aimed to obtain trajectories that have formal geometric expression and that can correctly represent the scattering of vehicles’ position, because these reference lines are defined after a statistical analysis of collected data.

Martin Vsetecka, Martin Novak and Tomas Apeltauer – Solution to a capacity problem using non-conventional intersections / When designing the road network for the urban tender for new southern part of Brno city center, the authors of this paper came across a problem of heavily loaded intersection, which due to capacity reasons could not be designed as one-level – due to architectural issues and because of a nearby small river it was also not possible to use a multi-level design. Focus was therefore put on designing a non-conventional intersection, which diverts left turns to a neighboring intersection, instead to nearby streets. The nearby streets can therefore be designed as purely service roads. In contrast to a one-way design or a design with only right turns permitted, this does not lead to lengthening the routes and is also important for the environment. The traffic at the traffic light-controlled complex of intersections has been tested using a microscopic traffic simulation, which proved the higher capacity of this solution. Sufficient capacity margin is important not just for the vehicles, but also pedestrians, because otherwise there would be a pressure to reduce the number of crosswalks.

Hrvoje Pilko – Roundabouts: Case study of Croatia / The popularity of roundabout application around the world is evident. Due to the inexperience of construction companies and the lack of proper national guidelines, distinctiveness in design is noticeable. In some intersections this led to reduction of traffic (operational) efficiency and safety. The purpose of this author was to: 1) present the current state of roundabout effectiveness in the Republic of Croatia, 2) show examples of good practice, and 3) to present and comment the latest Roundabout Design Guidelines on State Roads 2014. Research results will serve to disseminate the knowledge for proper application and implementation of national rounda-bouts in order to compare it with international design practice and standards.

Šime Bezina, Ivica Stančerić and Saša Ahac – Design vehicles and roundabout safety – review of Croatian design guidelines / In the last decade, roundabouts became popular design solutions for new or reconstructed intersections in urban and suburban areas of Croatia. In most cases their application on the road network has numerous positive benefits compared to the conventional intersections, such as improved intersection safety and capacity, reduced maintenance costs and air pollution. Latest Croatian guidelines for roundabout design were published in June 2014, and their usage is mandatory for the intersections on the state roads. The review of those guidelines was presented through several theoretical examples of single-lane suburban roundabouts with various external radii (from 17.5 to 25.0 meters, with 2.5 meter interval), designed according to the analysed guidelines. Following vehicles will be used in swept path analysis: truck with trailer, semitrailer truck and tri-axle bus. In analysed guidelines aforementioned heavy goods vehicles are defined as the design vehicles, with all vehicle parameters needed for quality swept path analysis. Three-axle bus is chosen for this analysis, although it is not specifically defined as a design vehicle in the guidelines, because Croatia is a popular tourist destination with numerous guests arriving from distant locations, and these buses are a common mean of their transport. Abovementioned vehicles occupy different swept path width when turning, depending on the turning angle and radii. Because of that, resulting entrance and exit widths and consequently the speed profiles on roundabouts with the same external radius also differ. These differences, as well as the impact of analysed design vehicles on the roundabout geometric design and speed profile, was presented in this paper.