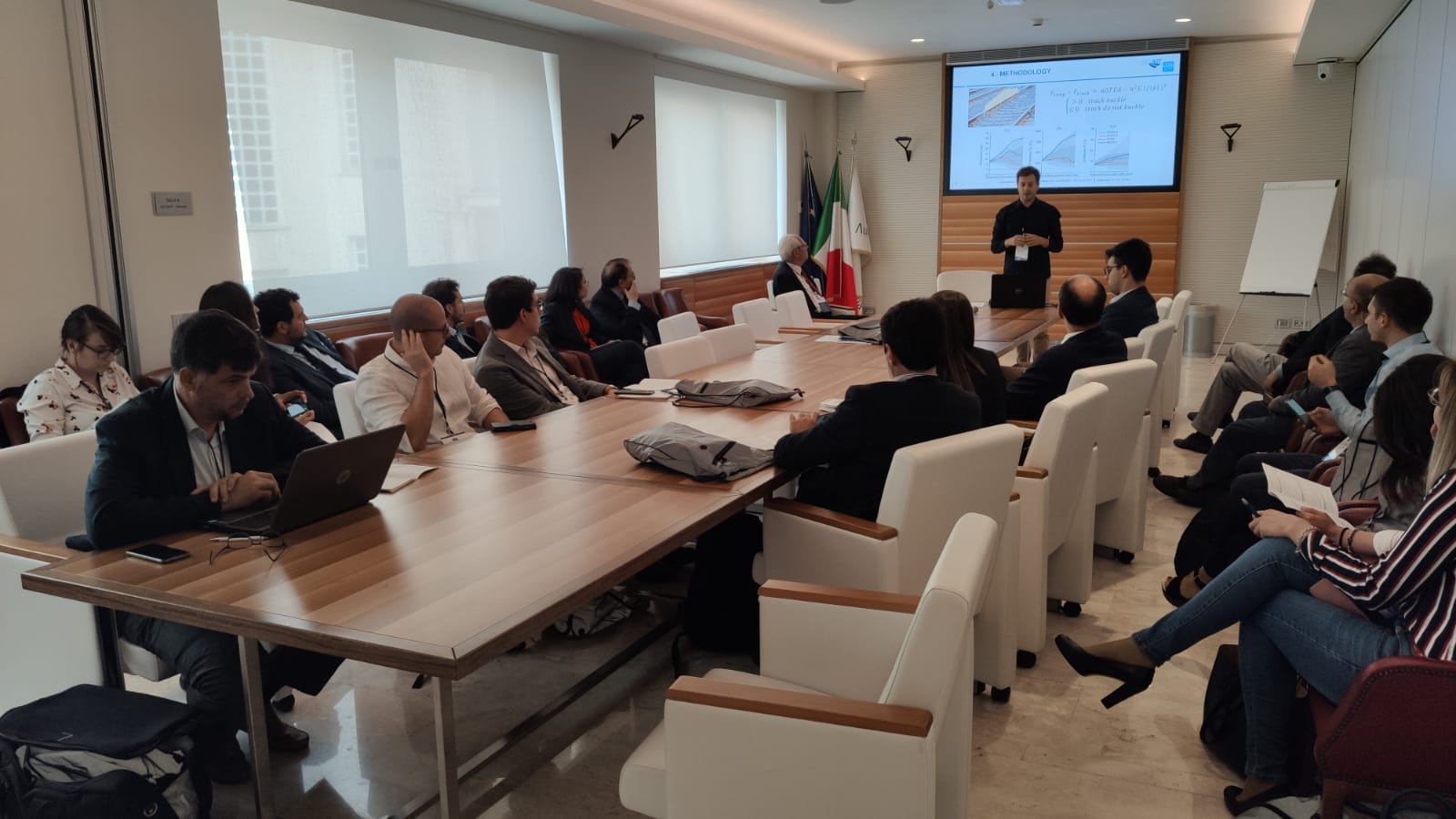 Railway Transport is was the main issue discussed during the session of the TiS Congress chaired by Giovanni Mantovani .

Ignacio Villalba Sanchis, Ricardo Insa Franco, Pablo Salvador Zuriaga and Pablo Martínez Fernández –  Risk of increasing temperature due to climate change on operation of the Spanish rail network / The rail network in Spain is around 16.000 km of Iberian, standard and narrow gauge, connecting the main population cities and hubs of transport. Due to it’s geographical location in the south of Europe, during the summer the Spanish rail network is subjected to high temperatures including heat wave events, where temperatures become exceptionally elevates. Moreover, climate models and predictions considers that heat waves are going to become more frequent and intense in the next years (2021-2100). Understanding the potential impacts of climate change is essential for informing both adaptation strategies and actions. However, the impact in the railway infrastructure have not been fully addressed due to the differences in local environmental parameters.
In this study, the issue of potential impacts of heat-related events are analyzed in terms of cost and delays under relatively high and low climate forcing scenarios in the Spanish rail network. The approach addresses the frequency of buckling events to establish trends between heat-related events and track buckling events. This review is of significant importance for planning, design and maintenance, providing a predictive track maintenance regime in order to assist the decision-making process towards more cost-effective management in the railway industry.

Andrea Simone, Claudio Lantieri, Valeria Vignali, Francesco Mazzotta, Michele Carpinone, Marco Nanni, Davide Davalli and Federico Cuppi – A risk assessment method for “Eurobalise” fastening system: managing the sensor/sleeper interaction in the high-speed railway infrastructure/ The aim of this research is to define a breakage limit for the fastening system of the “Eurobalise” device of the ERTMS / ETCS rail signalling system on the European railways. The widespread presence of the system along the European railway line and the increasing of high-speed lines have led the research to find design solutions able to increase the attack system strength, avoiding its detachment from the sleepers. Mechanical tests on tensile, shear and bending configurations have been carried out to evaluate the jointing systems between Eurobalise and sleepers. Additional full-scale tests allowed the definition of the load actions and, consequently, of the breaking points. The connection of balise to sleepers is able to react to the train’s aerodynamic actions, confirming the system reliability even for the passage of high-speed trains.

Luca Bianchini Ciampoli, Alessandro Calvi and Emanuele Oliva-Test-site operations for the health monitoring of railway ballast using GPR / Effective maintenance of railway infrastructures requires a comprehensive knowledge of the actual condition of the involved construction materials. In this regard, ground-penetrating radar (GPR) stands as a viable alternative to the invasive and time-consuming traditional techniques for railway inspections. This work reports the experimental activities carried out in a test site area within a railway depot in Rome, Italy. Specifically, a 30 m-long railway stretch was divided into 10 sub-stretches reproducing different various physical and structural conditions of the track-bed. In particular, combinations of varying scenarios of fragmentation and fouling of the ballast were reproduced. The set-up was then investigated using different multi-frequency GPR horn antenna systems. These were towed along the rail sections by means of a dedicated railway cart. Main electromagnetic parameters of railway ballast were estimated for each scenario using time- and frequency-domain signal processing techniques. Interpretation of results has shown viability of the GPR method in detecting signs of decay at the network scale, thereby proving this technique to be worthy for implementation in asset management systems. The research has pointed out key information in regard to the practical use of an air-coupled GPR system for assessing fragmentation and fouling in railway track-bed.

Angela Carboni and Francesco Deflorio-Simulation of rail-road terminal operations and traffic control strategies in critical scenarios / Rail-road terminal contributes to competitiveness of intermodal transport and plays an important role in the transport chain to achieve seamless cross-modal processes. Nowadays freight transport must meet requirements of environmental sustainability and rail-road transport can be an eco-friendly option for medium/long distance connections due to the positive characteristics of railways segment. Intermodal terminals must guarantee a fast, safe and efficient transfer of intermodal loading units from one transport mode to another. Terminals are fitted with all the equipment required to handle loading units, as gantry or mobile cranes. These can be critical components for terminal process since often their number, for their relevant cost, is not sufficient to guarantee the desired redundancy.
The paper presents a micro-simulation approach to provide an evaluation of the resilience of typical rail-road terminals in a critical scenario (i.e. temporary unavailability of one gantry crane). The resilience can be defined as the capability of the system to recover its functionality despite the disruption. To maintain the desired level of service inside the terminal a gating strategy is also proposed. In fact, a traffic control solution is investigated to enhance terminal resilience when a disruption in terminal process occurs.
The proposed simulation method allows an appropriate sensitivity analysis under disturbed conditions and also the flexibility of the simulated terminal can be easily assessed. The comparison is based on equal starting equilibrium condition, setting arrival and service rate, around the capacity of the infrastructure.
In the simulation tool, the relevant features of the typical phases of the internal process are represented and the traffic flow data of arrivals by specific classification are disaggregated. To compare different scenarios (the baseline scenario, the disruption scenario, the recovery scenario) modelled by traffic microsimulation some quantitative Key Performance Indicators (KPIs) are used in terms of quality and energy impacts.

Fabio Tosti, Valerio Gagliardi, Fabrizio D’Amico and Amir Morteza Alani-Transport infrastructure monitoring by data fusion of GPR and SAR imagery information / In order to maintain the highest operational safety standards, it is crucial that surface and structural deformation caused by geophysical natural hazards and human-related activities in linear transport networks (such as highways and railways) are monitored and evaluated. Today, Ground Penetrating Radar (GPR) is a well-established technology among the available non-destructive testing (NDT) methods for the collection of ground-based information. Concurrently, the space-borne Interferometric Synthetic Aperture Radar (InSAR) is another well-known viable methodology for large-scale investigations of road network surface deformations. However, it is fair to comment that the potential of this method in the area of transport infrastructure monitoring has not yet been sufficiently explored. Within this context, this research demonstrates the viability of integrating InSAR and GPR for monitoring transport assets at network level.

The main theoretical and working principles of the two above-mentioned methodologies have been presented and discussed, and the advantage and drawbacks of each technique have then been analysed. The final section of the paper examines a recent experimental activity carried out on a real-life railway located in Puglia, Southern Italy. Test outcomes prove the viability of the proposed data fusion methodology for monitoring the health of transport assets at network level. However, InSAR was found to be valuable toll for identifying critical spots in a linear infrastructure at network level.

Bernhard Rüger-Efficient rail vehicle design – common designing mistakes and options for improvements / In order to be “competitive” as a railway, operating efficiency counts as an imperative. In the context of railway carriage interior planning this is often made subordinate to other substantial aspects such as for example, expediency. This leads in practice to the opposite wished for result. Misunderstood operating efficiency concepts such as a maximal utilization of space for seating can in reality lead to a decline in operating efficiency, operational problems and in incidents to serious safety risks.
The paper points out mistakes done when designing rail vehicle interiors, will show the effects and will stress how to improve. Evolution of the interiors concept regarding efficient baggage storage, highest possible occupancy rate and low dwell time in case study of DB (German Rail), SBB (Swiss Rail), OBB (Austrian Rail) and Bombardier.

Giorgio Pizzi -Cybersecurity and its integration with safety for transport systems: not a formal fulfillment but an actual commitment / Technologies used in transport systems are prone to cyberattacks. Vulnerabilities and hacking cases are already documented in this field.
In the last two or three years guidelines and methods for cybersecurity in transport systems have been drafted and the importance of convergence of safety and cybersecurity has been stressed. Many companies today offer products and services for this field. There is the risk, however, that such an important matter will be considered as a formal fulfilment.
The need to guarantee cybersecurity is not arisen, some decade ago, in order to conforming to regulations or guidelines, but to counter attacks to systems. Cybersecurity development in computer systems has been a bottom-up process whose results are now being applied to vertical sectors among which transport systems. It’s not enough enforcing standards achieved in more than thirty years of knowledge development of cybersecurity in computer systems to a new specific field for a real and effective protection, nor a skilled and motivated attacker can be thwarted by exhibiting a certification. Moreover, there is still scepticism and underestimation of cybersecurity matter by the operators, mostly for what concerns its importance to transport safety.
In order to promote a real awareness about vulnerabilities afflicting transport systems technologies, which rely mostly on embedded devices, and attacks that can exploit them we use as an example a real incident involving a railway vehicle safety-critical subsystem to develop a case study concerning a cyberattack, aiming to show that devices and technological systems vulnerabilities must not be neglected in risk analysis. On the contrary, they must be taken into account the same way as hazards in safety assessments for an effective integration between cybersecurity and safety.