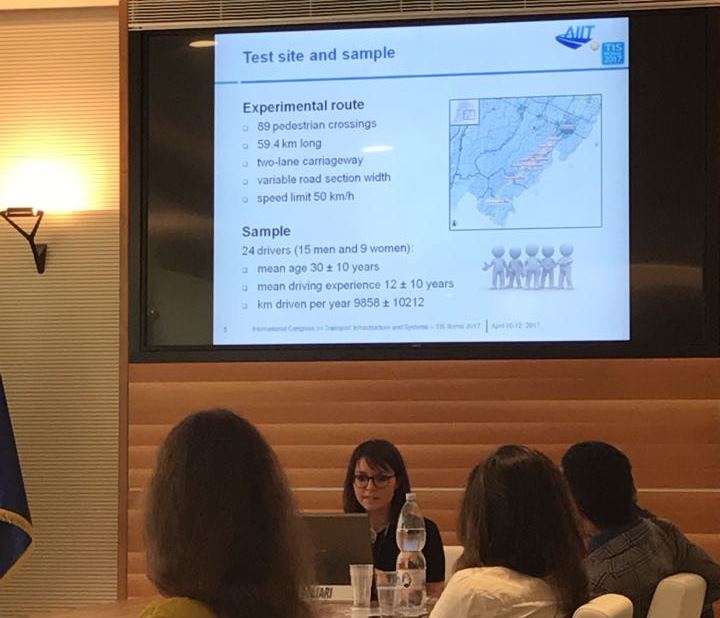 The importance of a road safety based approach for road networks development and maintenance has been discussed during this 8th session of the TIS Congress. The papers presented during this session focused on innovative experiences, with specific regard to pedestrian and cyclist safety. The session was chaired by Enrico Pagliari from ACI – Italy.

Yuri Trofimenko, Igor Markin and Elena Shashina – Designing Principles of the Efficient and Safe Urban Cycling Infrastructure / Full use of a bicycle as a vehicle in the cities requires an effective and safe cycle network creation, harmoniously integrated into the urban space. The paper provided a hierarchical structuring of the requirements and approaches to the cycle network designing on the city and municipal levels, formation of the cycle corridors as well as cycle network linear sections and intersections. 14 typical in architectural and planning terms measures for the cycling infrastructure objects are identified, providing a high level of comfort and safety. The most relevant measures for Russian cities are ensuring the sight distances, traffic flows calming, ensuring the prohibition of vehicular access to the cycling infrastructure, bicycle traffic organization on one-way streets, location of bike lanes and vehicles parking, mutual location of pedestrian and bicycle paths on the sidewalks, level crossings organization – intersections, level crossings organization – turnarounds, location of the cycle paths and bus stops. Safety and ecological performance of these measures were evaluated on existing and future cycling routes in Kazan and Kaliningrad using a specially developed methodology. It is recommended to use these measures during the perspective cycling routes and cycle network formation.

Boris Antic, Dalibor Pesic, Nenad Milutinovic and Marko Maslac – Pedestrian behaviour in traffic: validation and improvement of pedestrian behaviour scale in Belgrade (Serbia) / Pedestrians, as the vulnerable road users, belong to the group of the most vulnerable categories in traffic. Considering the fact that the level of traffic safety mostly depends on the behaviour of all road users, it is very important to carry out the research on pedestrians behaviour, in order to recognize the differences between genders, age groups and other characteristics that can influence their behaviour. The current version of Pedestrian Behaviour Scale (PBS) was conducted among the participants in Belgrade, the capital city of Serbia, on a sample of 403 participants. In addition to the completed validation, the applied PBS version of the questionnaire was also improved by the addition of questions related to the use of mobile phones while crossing the street. Factor analysis showed that the data best fit into the five-factor solution (violations, errors, and lapses, aggressive and positive behaviours). The results showed that the greatest number of violations is made by the persons who forced walking, and most number of errors and lapses are made by the youngest and by the oldest age group of the pedestrians. The results of this and similar studies point out to the direction for improving the traffic knowledge of pedestrians.

Enrico Pagliari and Stefania Balestrieri – Pedestrian Paths : Safety and Accessibility for all users / The proposal includes the assessment of quality, also under the accessibility point of view, and safety performances over the streets of pedestrian paths. The aim of the project presented was to understand how safe and accessible our pedestrian paths really are (especially for disabled people). In an urban contest, pedestrians are the most vulnerable road users. The authors proposed a new assessment methodology that aims to improve quality and safety of the pedestrians’ accessibility in our streets, for example: are our roads really safe and accessible for everyone? Which are the main obstacles/design mistakes in making a pedestrian path/sidewalk along the streets for everyone, in particular for disabled people? What are the principal suggestion to improve the quality of the our streets? In the development of the methodology has defined: parameters and indicators for the assessment, checklists, test protocol and evaluation grid.

Arianna Bichicchi, Francesco Mazzotta, Claudio Lantieri, Valeria Vignali, Andrea Simone, Giulio Dondi and Marco Costa – The influence of pedestrian crossings features on driving behavior and road safety / Traffic safety depends upon the integrated and complex relationship between various components: driver psychology, traffic, vehicles and road infrastructures. According to statistics, the aspect that seems to be the most important, as it is responsible for most accidents, is the behavioral component, and therefore the psychology of the driver of the vehicle. When considering the interaction between drivers and road infrastructure, pedestrian crossings play a significant role because theirs configuration, in terms of traffic signs and road signage, impli-cates different behavior responses. In the presented study, a sample of 24 drivers performed a trial route of 59.4 km to investigate the totality of non-signalized pedestrian crossings located along the roadways. GPS kinematic parameters and mobile eye tracking data were registered to evaluate their approaching behavior. Pedestrian crossings were classified according to the configuration of road elements present in the each intersection. For each single crossing were evaluated approach speed, distance of pedestrian crossings perception and fixation time to specific elements. The frame-by-frame video analysis shows that at least one element is visualized by 84.64% of drivers and the presence of certain elements and their configuration determine significant differences in sight distances and speed adaptation. Overall, drivers behavior is significantly influenced by crossings complexity, determining remarkable effects on the incidence of fatal pedestrian accidents.

Paolo Budetta, Giovanni Forte and Michele Nappi – Loss of life risk due to impacts of boulders on vehicles traveling along a very relevant road / Rockfalls on transportation corridors can cause casualties due to direct impact on vehicles or by impact of vehicles with deposed material, as well as a large amount of economic consequences mainly due to traffic interruptions. The rockfall risk evaluation affecting roads is a highly complex operation requiring the assessment of the hazard (triggering mechanisms and the run out parameters) and the vulnerability of vehicles on the roads along the foothills. Vulnerability mainly depends on the vehicle speed and length, the available decision sight distance, the traffic volume, the length of the rockfall risk section of the route, the number of occupants in a vehicle, and the type of vehicle. In quantitative terms, the annual probability of loss of life to an individual is given by multiplying the annual probability of occurrence of a rockfall event (of a given magnitude) by the probability of a falling rock hitting the moving vehicle, and by the vulnerability of the person given a block of size m impacting the vehicle. In order to apply this approach, the number of boulders that may hit the road must be obtained through trajectory simulations by calculating the percentage of all trajectories that could fall on the road or that are not interfering with it. The aim of this paper has showed the results of applications of probabilistic approaches to a road section be-longing to a coastal road which is characterized by high traffic intensity, and linking Naples with Salerno (the Tirrena inferiore no. 18 state road). The studied road section crosses a high and very steep slope affected by recurrent rockfalls. The slope is also crossed by others important transportation corridors (the A3 motorway, the railway Naples-Reggio Calabria and a viaduct linking the Salerno harbor with the A3 motorway) which suffer from traffic interruptions due to landslides. Consequently, the suggested approach which mainly concerns the spatio-temporal interaction between falling rocks and moving vehicles could be also used for these important transportation corridors characterized by the same geomorphological and geological conditions.

Mussone Lorenzo and Marco Bassani – Back-propagation neural networks and generalized linear mixed models to investigate vehicular flow and weather data relationships with crash severity in urban road segments / While most of the studies deal with the evaluation of the contributing factors that affect the crash frequency in a road network, only few contributions have been provided on the identification of variables and better models that can explain why a certain severity level may be expected in a certain crash that can occur in a certain location of the network. The paper showed as such topic presenting a crash severity analysis carried out in the urban road segments of Turin (Northern Italy). In the investigation, two official crash records, a weather database, a traffic data source and information on the characteristics of the investigated urban road segments for the seven years from 2006 to 2012 were used. Starting from the full database of 47,592 crash events including property damage only crashes, 27,970 were injury crashes. Of these, 2,752 belonging to various severity levels were found to be associable to a dataset of traffic flows aggregated in 5 minutes (short term) for the 35 minutes across each crash event. The weather data recorded by the official weather station of Turin were also included. Analyses were performed by using two different approaches: a back-propagation neural network model and a generalized linear mixed model. Results show the impact of flow and other variables in the severity level that could characterize a crash according to certain combinations of influencing factors. Differences in the significant variables and performance of the two modelling approaches are also reported.